Another Joburg council sitting hampered by disruptions and ‘political games’ 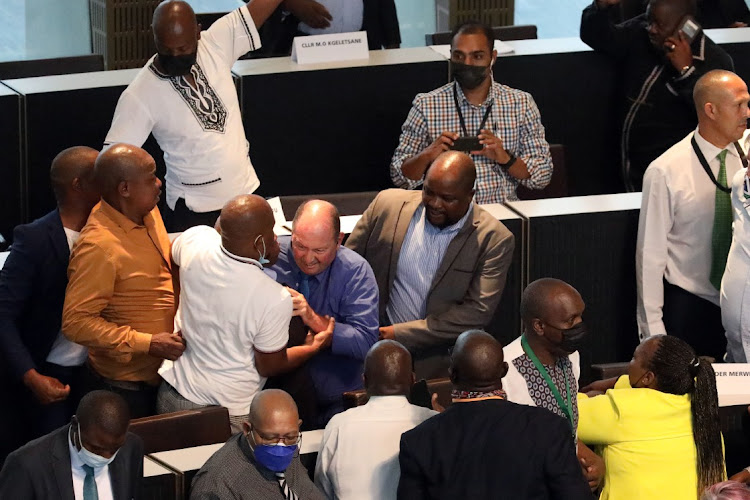 Councillors indulged in more than four hours of chaos, finger wagging, pushing and shoving inside the chamber.
Image: VELI NHLAPO

A rescheduled special council sitting in the City of Johannesburg hit a snag on Tuesday when some councillors disrupted the meeting and engaged in “political games”.

The meeting attended by 268 councillors was due to elect the chair of chairs and chairpersons of portfolio committees. These positions are critical to the delivery of services to Johannesburg residents.

The sitting commenced at 10am. Five hours later the election had not taken place as councillors sought constant caucus breaks and the removal of security in council chambers.

The precinct was heavily guarded by police after the same meeting descended into chaos last week and left personnel injured.

First the ANC, relegated to the opposition benches after taking a beating in the local government elections, demanded a 30-minute caucus break which ended up taking nearly an hour. The EFF, Patriotic Alliance (PA) and minority parties later demanded the same.

Speaker Vasco da Gama’s attempt to put an end to the breaks was not successful. Chaos erupted as some councillors left their seats, wagging fingers and shouting about their rights being violated. Some went as far as telling Da Gama to stop “micromanaging” them.

“I have given you enough time to have caucus breaks. We are now going to continue with the business of the day,” he said.

“We all came here to do council work, but you seem to want to play political games. Please, if you do not want to be in this meeting, you know what to do,” he said.

It is the second time the council sat in less than a week. Previously, ANC and EFF councillors demanded that voting take place by secret ballot instead of a show of hands.

The sitting comes a day after the DA-led multiparty coalition governing the city called for President Cyril Ramaphosa’s urgent intervention amid fears of more clashes and delays. Opposition parties including the FF Plus, ActionSA, PA, COPE and DA lamented the behaviour of ANC and EFF councillors.

“I appeal to the honourable Ramaphosa that he must intervene immediately before tomorrow and ensure their members respect the democracy. If he doesn’t do that, he is nothing but a hypocrite. SA is looking at the president, if he is a president for words and no action,” said Pieter Groenewald of the FF Plus.

The continued disruptions may see the city unable to pass its budget for 2022/2023.

COPE councillor Colleen Makhubele was nominated for the position of chair of chairs alongside the EFF’s Nonhlanhla Radebe.

The meeting is ongoing.

The leader of the official opposition in the Western Cape legislature, ANC MPL Cameron Dugmore, says he is determined to unmask the DA for double ...
Politics
4 months ago

The speaker of council in the City of Johannesburg, Vasco da Gama, has committed to beefing up security at the chambers after a council meeting ...
Politics
4 months ago