Zuma a victim of 'cooked-up prosecution because of political manipulation' 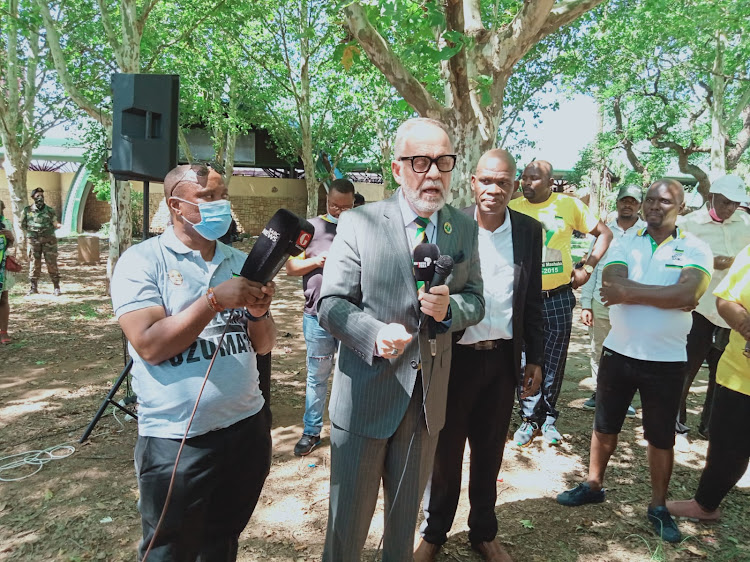 Suspended MKMVA spokesperson Carl Niehaus outside the Pietermaritzburg high court on Monday where former president Jacob Zuma's legal team is arguing that he is a victim of political manipulation.
Image: Mfundo Mkhize

Evidence of political manipulation in the decision to charge Jacob Zuma should have been properly tested through oral evidence and not just “swept under the carpet”.

This was the submission of one of Zuma’s advocates, ​​Thabani Masuku, in the Pietermaritzburg high court on Monday where judge Piet Koen is hearing argument by the legal team. They maintain that Koen should grant them leave to appeal to the Supreme Court of Appeal to consider Zuma's allegations of prosecutorial bias.

When he pleaded not guilty to charges of corruption, fraud and money laundering relating to the arms deal at the start of his trial last year, Zuma raised a “special plea” saying lead prosecutor Billy Downer had no “title” to prosecute him.

This was because Downer was allegedly biased and was guilty of misconduct. As such Zuma would not get a fair trial.

But Koen ruled against him, essentially saying fair trial issues could be raised during the trial itself.

He took a “narrow” approach to the issue of “title”, interpreting it as having legal standing to act against Zuma as the prosecutor and did not, as Zuma’s lawyers contended, involve issues of good standing.

Former president Jacob Zuma is an “old person” who should not be forced to endure the strain and cost of a trial before being allowed to state his ...
Politics
6 months ago

In one of many arguments raised by Zuma’s legal team in their bid for leave to appeal, they say the judge should have referred the matter for oral hearing at a “trial within a trial”.

Masuku referred to an affidavit by advocate Willie Hofmeyr, now retired head of the Asset Forfeiture Unit, in which he referred to political meddling within the National Prosecuting Authority, specifically between former national director of public prosecutions Bulelani Ngcuka and Leonard McCarthy, the head of the now-disbanded Scorpions.

He said Downer had stated that these allegations did not affect Zuma’s right to a fair trial “and your Lordship agreed that they were insignificant”.

“But they are not going to go away because the NPA does not want to deal with them ...  complaint of this nature, of criminal misconduct, ought to concern and horrify the courts.

“He (Zuma) should not have to suffer the indignity of a cooked-up prosecution because of political manipulation. These issues should not have been decided on affidavit ... you needed to have heard the evidence and decided where the rot goes.”

He said Downer was a witness to this “criminal activity” and had done nothing about it.

“Another court may direct in specific terms that this court gives this (special) plea the trial it deserves. It’s in the interests of justice. It will ensure the accountability of the NPA, for a clean prosecution and that the NPA conduct is as serious to the courts as it is to everyone else,” he said.

The state is opposing the application.

It argues that the Criminal Procedure Act does not permit an appeal in a criminal matter ahead of conviction and sentence and the only avenue open to Zuma’s lawyers is to argue before the SCA that it has decided a similar matter relating to the interpretation of “title” incorrectly.

The ANC KZN provincial executive committee has been blamed for the poor turnout at the corruption trial of former president Jacob Zuma at the ...
Politics
6 months ago

LaConco talks about failed relationship with Jacob Zuma: ‘I don’t think the scars will ever heal’

LaConco finally broke her silence on her relationship with uBaba, saying: "No-one gets into a relationship, especially if you are young, to face ...
TshisaLIVE
6 months ago

Former president Jacob Zuma's legal team will unleash their legal "machine gun" on Monday when they argue he should be permitted to state his case of ...
Politics
6 months ago