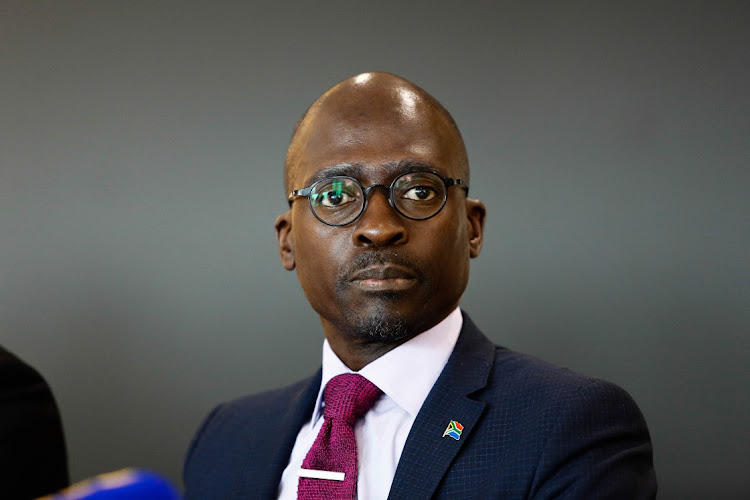 Disgraced former public enterprises minister Malusi Gigaba was a “dupe” and “Gupta man” who abused his position, violated the constitution and flouted financial regulations to allow the disgraced family to capture Denel through flawed and irregular contracts.

That is how acting chief justice Raymond Zondo, the chair of the state capture commission of inquiry, described the erstwhile minister in his latest report.

Under the defence procurement programme, Project Hoefyster, the company — which was globally renowned for its precision heavy steel cutting abilities — was awarded a contract on November 28 2014 by Denel Land Systems to produce the hulls and turret components for just over 700 Badger combat infantry fighting vehicles.

The Badger, some of which were to be specially fitted with 30mm cannons, was to replace the army’s ageing Ratel infantry fighting vehicle.

“The Guptas and [their associate Salim] Essa took control of VR Laser and engineered for themselves a position as Denel’s most privileged supplier of complex engineering systems. This included steel armour plates and being Denel’s single and exclusive partner,” the report states.

Zondo, who blasted Denel executives and its board for violating the constitution, said the award of the contracts was “irregular and flawed” and called for board members appointed from 2015 to be criminally investigated and possibly prosecuted for violating the Public Finance and Management Act.

He also called for criminal investigations into those who supported the suspension of the former group CEO Riaz Saloojee, who was one of three executives who tried to stop Denel’s capture.

“The constitution is binding on all organs of state, such as Denel, and all decisionmakers within Denel were obliged to implement its terms, both in letter and in spirit.

“Regrettably, that was not how [many of] the Denel executives, with the exception of [a few] saw it. They were preoccupied with getting the job done and felt frustrated by what they saw as an unnecessarily lengthy and cumbersome decision-making process which got in the way of getting the job done.

“So, they cut procedural corners and overrode or ignored the wholly correct objections to the process raised ... All the executives concerned who participated in the corner cutting procedural exercise, which led to the award of the hulls contract to VR Laser, either knew broadly that they were acting in violation of their obligation to promote a procurement process consistent with the constitution or ignored the readily available material which would have put them on the right path. For these executives, the means justified the end.”

Justice Zondo said it was improper for Denel to approach VR Laser to reduce its tendered price without giving other tenderers a chance to revise their bids; to sideline and then override Denel officials who were against the awarding of the contract because of the flawed process; to accept the criticisms of other competitors’ capacity to perform without giving them an opportunity to deal with those criticisms;  not to start the tender process afresh once the flaws in the process were pointed out; and that the process was concluded in an overly hasty manner.

Zondo said the capture of Denel was orchestrated through the Guptas’ takeover of VR Laser, through the participation of Gigaba and former president Jacob Zuma’s son, Duduzane Zuma.

Zeroing in on testimony provided by Saloojee, who was eventually suspended, Zondo criticised Gigaba.

Saloojee had testified about how he had repeatedly resisted overtures by the Guptas, who through their lieutenant Essa tried to woo him over.

“Saloojee was appointed the GCEO of Denel with effect from January 16 2012 for a fixed term ending on January 31 2015, but renewable thereafter by agreement. When the Guptas, through Essa, called Saloojee to his first meeting with them at their Saxonwold compound shortly after his appointment, their penetration into the SA public and commercial life was relatively well known.

“Their influence at that date is shown by the following facts which emerged from the evidence. First, they persuaded the then-minister of public enterprises, Malusi Gigaba, and Saloojee, the newly appointed CEO of Denel, to go to the Gupta compound on the same day. Second, that Tony Gupta there introduced Gigaba to the CEO of one of the SOEs for the administration of which Gigaba, as the representative of Denel’s shareholder, the SA government, was responsible. Third, that at the conclusion of this very brief meeting, Gigaba made suggestions that Mr Saloojee should work with the Guptas or should co-operate with them.”

Zondo said that despite Saloojee “fobbing” off the family, the Guptas continued to apply pressure on Saloojee through Essa to meet them.

“Saloojee continued to fob them off by restating his position that if they wanted to do business with Denel, they should use its channels created for that purpose. Saloojee’s evidence was that he did not report or share with others the pressure the Guptas were applying to him because he did not know whom to trust. This rings true.

“The Guptas began their relationship with Saloojee by demonstrating to him that they had access to Gigaba. He was told more than once by Essa that approval of the approach to him [Saloojee] by the Guptas had been sanctioned at the very top.”

Zondo wrote that while Gigaba denied Saloojee’s evidence, “Gigaba did not advance any reason or explanation as to why Saloojee would have said he met him at the Gupta residence and that they were introduced to each other if in fact that is not what happened”.

“In other words, Gigaba did not advance any reason Saloojee would have falsely implicated him in this way. Saloojee had no reason to lie about this. On the other hand, Gigaba may have denied Saloojee’s evidence because he did not want to be seen to have urged Saloojee to co-operate with the Guptas. On the probabilities, Saloojee’s version is true.

“The commission agrees with the impression gained by Saloojee from this meeting: that the Guptas were demonstrating their reach and influence, at a high political level. Saloojee’s response to this overture was appropriate: in effect, ‘If you want to do business with Denel, go through the proper channels.’ This was a refrain that Saloojee was to repeat throughout his interactions with the Guptas and Essa and was to culminate in Tony Gupta’s question to Saloojee, in effect: why did Saloojee not take money for doing the Gupta’s bidding, as everybody else did?”

Former public enterprises minister Malusi Gigaba knew the controversial Gupta family well and even knew their mother, even though he denied this ...
Politics
6 months ago

Zondo said that based on Saloojee’s testimony that Gigaba had used his position of authority and his status as Saloojee's ultimate superior to solicit SOEs for business for his “friends”, Gigaba’s conduct called for strong censure.

“Such conduct  violates the constitution, which requires public powers to be exercised ... However, it seems that, as the law stands at present, such conduct, by itself, attracts no criminal sanction. This forms the subject of one of the commission’s recommendations.”

Zondo said that there was no doubt that the Guptas brought Gigaba to the meeting with Saloojee to show Saloojee that Gigaba was “a mere tool in their hands, a dupe who would do their bidding and from whom Saloojee could expect no protection.

“A politician who did not recognise this to be so would be naive indeed.

“It is the same as what, on the evidence heard by the commission, Tony Gupta used to do with Duduzane Zuma. He would bring him along to meetings that he had with government officials attached to state-owned entities and he would do all the talking and Duduzane Zuma would simply be there but not really take part in the discussion.

Minister in the presidency Mondli Gungubele conceded that the presidency failed to ensure the implementation of Special Investigating investigation ...
Politics
6 months ago