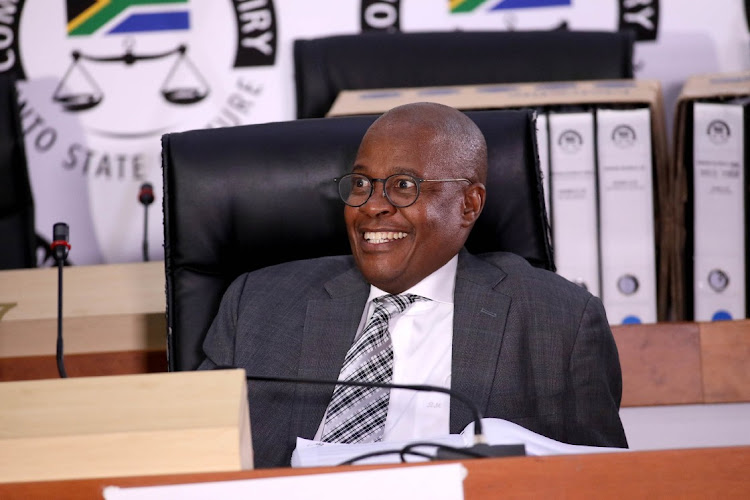 According to the report, Molefe might have breached provisions of the Public Finance Management Act when he approved a R20m settlement to General Nyanda Security (GNS) Advisory Services in January 2016.

Zondo further concluded that the controversial reinstatement of Gama as TFR boss after Molefe’s appointment as Transnet CEO, and the ultimate elevation of the former to replace the latter, was linked to Nyanda’s company.

GNS was fingered for having been irregularly appointed to provide security services to prevent cable theft at Transnet rail lines and having had the same contract extended improperly at least twice.

ANALYSIS | Molefe put up quite a fight, but Myburgh knocked him out anyway

Molefe came out swinging at the state capture inquiry, but lost on points after a gruelling five days
Politics
1 year ago

The fiasco started in 2007 when Transnet issued an open tender for the guarding of TRC cables and prevention of criminal activities against TFR , a process abandoned midway.

Nyanda’s company was contracted in 2008, with a specific mandate to provide security personnel at strategic locations. By July 2008, the GNS contract was “significantly extended” for additional services. Further services were again added 10 months later.

Both extensions of scope came with added financial burden to Transnet.

From being billed R1.8m by Nyanda’s company, Gama-headed TFR, and by extension Transnet, was paying a further R1.8m and R1m monthly to GNS.

Nyanda is described in the report as the “owner of the company implicated in the procurement irregularities that led to Mr Gama’s dismissal”.

He is also cited as among ANC politicians who were vocal in support of Gama when he was suspended before his dismissal.

However, Gama was to be reinstated amid great controversy by Molefe when he took over the driving seat at the state-owned enterprise (SOE).

After two months of billing Transnet, GNS scored about R100m despite its  controversial appointment and additional responsibilities added to its scope.

“The award of the contract to GNS was attended by significant misrepresentations and irregularities. Most significantly, GNS employed no staff at all and could not have deployed its own staff as the resources for which it invoiced Transnet monthly,” reads Zondo’s report.

This was confirmed by Transnet’s own disciplinary hearing carried out against two procurement officials who were shown the door, which proved GNS had no staff of its own but rather subcontracted the work.

In 2010, a decision to rescind the contract to GNS was taken and Transnet instituted court action with a claim to recover R96m from GNS, which fired back with a counter claim.

However, “after Mr Gama’s reinstatement as CEO of TFR in early 2011, there appears to have been a concerted effort to withdraw the litigation”.

Richards Bay Coal Terminal’s (RBCT's) export volumes fell to their lowest in 25 years in 2021 as cable theft and operational problems at Transnet ...
Business Times
6 months ago

Molefe had become the top boss at Transnet and showed little interest in championing the interests of the SOE but was rather intent on letting GNS off the hook, Zondo found.

In the following years, developments favouring GNS occurred , with Molefe apparently ignoring legal opinions that Transnet proceed with litigation against GNS as its claim had sound basis.

Molefe told a Transnet lawyer the matter was sensitive, adding that he had been receiving calls from a powerful person he did not identify but “assumed was general Nyanda”.

After the initiation of litigation against GNS, the company had been blacklisted from doing business with Transnet for five years, but Molefe lifted that sanction midway in 2013, arguing the company was wrongly accused.

In 2014, the Transnet Risk Committee resolved that litigation against GNS be abandoned and the board noted the same as negotiations to settle ensued between the two parties.

Molefe was leading the charge and agreed to pay GNS R20m from Transnet coffers.

“The agreement was concluded without the advice of Bowman Gilfillan, the attorneys representing Transnet in the litigation. Mr Molefe, as CEO, signed the deed of settlement on behalf of Transnet on August 4 2014.

“Though not entirely clear, the person who signed on behalf of GNS/Abalozi seems to have been general Nyanda,” the report reads.

GNS demanded R40m instead of R20m as final settlement, arguing “Transnet’s actions had caused irreversible harm to their reputation”.

“The proposed amount also took into account loss of revenue on the TFR contract as the contract was on a month-to-month basis until the completion of a new tender process.”

Molefe adopted a posture that they were pushing it too far and settled on R20m as the final settlement, a decision which Zondo slammed as “nonsensical,” and said he suspected Molefe knew this when he approved it.

“Moreover, Mr Molefe opted to settle the claims for additional amounts before summons had been issued in respect of them and without properly investigating whether the claims were valid or inflated, as they appear to have been.

“He was not suspicious of the fact that GNS, within weeks of making the claims, was prepared to settle an alleged entitlement to R1.4bn (including a wholly unrealistic defamation claim of R700m) for R20m. He was adamant the claims were not inflated and he was entitled to rely on internal legal advice (which he could not substantiate) without applying his independent judgment to the merits of these dubious claims,” the report reads.