The EFF is accused of hate speech and inciting violence by lobby group AfriForum. It wants the court to declare the song constitutes hate speech and for the party to apologise for its continuous chanting of it during its events. 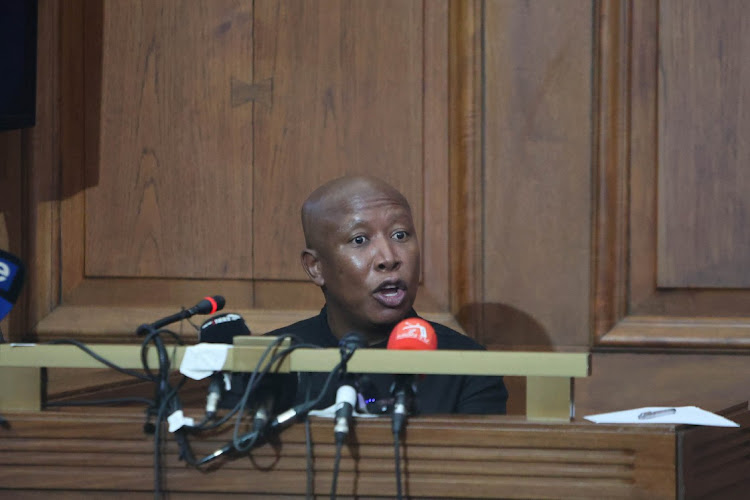 EFF leader Julius Malema says all South Africans, regardless of land ownership, are affected by crime.

The classification of farm murders was “misleading as it elevates white people over black people” in townships who are also victims of crime.

He was testifying in the Equality Court this week in a civil case brought by lobby group AfriForum against the EFF.

The case focuses on the controversial “Kill the Boer, Kill the farmer” song, or chant, often heard at EFF events.

The EFF is accused by AfriForum of hate speech and inciting violence. It wants the court to declare that the song constitutes hate speech and the EFF to apologise for its repeated use.

The lobby group linked the increase in farm murders to the song.

Here are seven responses from Malema:

“You have the wrong man”

“No. I think you’ve got the wrong man,” said Malema when asked if he sang the song. AfriForum had no proof that he sang the song and videos they shared with the court did not prove their claims.

Contrary to claims by AfriForum, the EFF sang “Kiss the Boer”.

Struggle songs should not be interpreted in their literal sense as there is a political nuance to them.

“When black police went to the townships with police vans we used to run and say ‘there come the Boers,’ but there were no Boers in the vans, it was black police. Anything that symbolised the system was referred to as amabhunu (Boers).”

“I can’t say they were EFF members”

There was no proof that crowds singing the song in Senekal in the Free State about two years ago, were members of the EFF. They could have been angry community members offended by “vigilante attacks on police and vandalism of the magistrate’s court”.

“I can’t say they were EFF members. To be a member you have to have a member card and pay R10 for it. But what happened in Senekal was that the community was angry that those people attacked the police and stormed the local magistrate’s court.

“So the community went there to protect state institutions. There is calm in Senekal. Those white people never went back to the police and court again after that march.”

The EFF called President Cyril Ramaphosa's decision not to attend proceedings in person "snobbish" and "the greatest disrespect and inconsideration. ...
Politics
5 months ago

Provoking offence with “Kiss the Boer”

Malema was asked to explain the meaning of “Kiss the Boer”. He said it was meant to provoke “white supremacists who could have taken offence to black and white people kissing”.

“It was an immoral act for black and white people to kiss. It was declared by the apartheid system.”

“Chants by their nature are to agitate”

“Chants by their nature are to agitate. They are used for mobilisation, to make sure that the youth becomes interested in the struggle and that is why there will be sounds like that. To show that there is nothing literal, even the shooting of the gun — that is not the real gun. If everything was meant in a literal sense we would have taken guns and shot them in the air.”

LISTEN | I did not sing ‘Kill the Boer’, you have the wrong man, Julius Malema tells Equality Court

AfriForum wants Malema, the EFF and MP Mbuyiseni Ndlozi to apologise and pay damages for allegedly singing the controversial song.
Politics
5 months ago

“We are not targeting anyone”

The EFF seeks to challenge the “system of oppression”, not to incite violence against farmers.

“We are not targeting anyone. We are challenging a system of oppression that has robbed us of our land and economy.”

Asked whether he believed farmers were responsible for oppression, he said “they are the beneficiaries of the system”.

All South Africans, regardless of land ownership, were affected by crime and the “classification” of farm murders was misleading.

“You can’t classify it like that because then you are implying that a certain group of people, because of their race, must be elevated over the murder we see in the townships. There is murder going on in this country because we are occupying a crime scene.”

“You have no programmes to protect black lives on farms”

Asked if he would condemn the murder of 21-year-old farm manager Brendin Horner near Senekal, he said he condemned criminality in general.

He questioned why he should condemn the murder of Horner when there were farmworkers who were also killed on farms.

“You have no programmes to protect black lives on farms.”

From conspiracy to withdrawn statements and calls for removal: A catch-up on Cele vs Malema

The squabble between police minister Bheki Cele and EFF leader Julius Malema continues to play out in public.
Politics
5 months ago

Julius Malema says Cyril Ramaphosa is the worst president in SA's history, and black South Africans have become poorer with him at the helm of the ...
Politics
5 months ago

“What honourable Shivambu has just said is a distortion of the highest level on the conceptualisation of the role of the state in the economy,” said ...
Politics
5 months ago