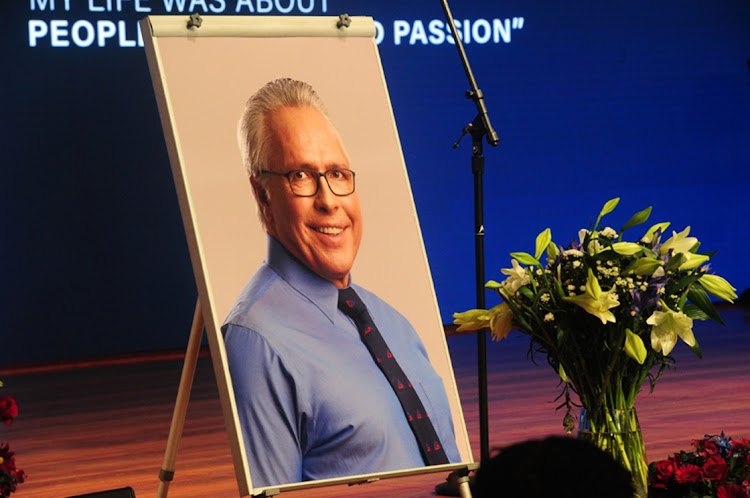 A picture of Gavin Watson at a memorial service held for him in 2019.
Image: Thapelo Morebudi/The Sunday Times.

How do you ensure your business gets an inordinate amount of government business? If you had put that question to Bosasa founder Gavin Watson before he died in a car accident, he would likely have given a simple answer: Pay.

The commission of inquiry into state capture released a 900-page tome on the illicit activities of Bosasa, which conducted work for government departments including correctional services, home affairs, education and transport.

Over more than a decade the company amassed more than R2.3bn in government contracts. They also paid a kind of illicit tax for this work, doling out an estimated R75m in bribes, according to Angelo Agrizzi, former chief operations officer turned whistle-blower.

Agrizzi told the commission about the bundles and boxes of cash kept at the Bosasa offices to help pay bribes, and inquiry chairperson Raymond Zondo said while some of Agrizzi's evidence was questionable, much of it was believable.

The commission noted that Agrizzi might have had “mixed” motives for giving his evidence, but his testimony is corroborated by work done by the Special Investigating Unit and other witnesses.

“While he may sometimes have sought to lessen his role to some degree, he was, on his own evidence, guilty of criminal conduct on a substantial scale. Taking this into account, along with the extensive corroborative evidence, it may be accepted Mr Agrizzi was in the main a truthful witness,” the commission said.

In the main, Agrizzi revealed a web of fraud, corruption, inducements and favours which Bosasa relied on to secure state contracts.

“Bosasa’s primary mechanism for attempting to influence public office bearers was the payment of cash bribes. The amounts paid tended to be commensurate with the degree of influence that could be exercised by the official concerned.

“The system involved seeking to do so, in most instances, on an ongoing basis. This was no doubt aimed at developing a corrupt form of loyalty to Bosasa through the dependence on the regular payments that would develop. By spreading the benefits relatively widely, it also sought simultaneously to maximise its corrupt influence, but also to decrease the likelihood of whistle-blowers coming forward to expose particular corrupted public office-bearers,” Zondo wrote.

Bosasa didn’t only use cash payments to exert influence, but also relied on favours and gifts.

One memorable example was Nomvula Mokonyane, who was the  recipient of a fully funded 40th birthday party. Watson also spent thousands of rand on buying her and her family groceries for Christmas. The gifts were to win favour in securing multibillion-rand contracts for the department of correctional services.

The commission said Bosasa needed to devise schemes to ensure a constant flow of cash.

Agrizzi and Andries van Tonder testified, said the commission report, that Watson and Bosasa required a substantial amount of cash every month which “necessitated establishing these illegal mechanisms”.

The company also went so far as to create ghost employees to keep cash on the books.

The company would keep anything from R2m to R6.5m cash on the premises to enable bribe payments. The commission had seen video evidence of the vault housing large sums of money being counted by Watson.

“Mr Agrizzi also gave evidence regarding the system implemented for the handling of cash. Mr Agrizzi and Mr Watson would meet on a monthly basis with the board who would give instructions on what needed to be paid to whom. After Mr Watson had approved a list compiled by Mr Agrizzi, Mr Agrizzi would encode the list and the cash would be packed per code-identified recipient. Mr Agrizzi would then hand grey sealable bags with the money to the member of senior management who would deliver the money to the relevant officials,” the report reads.

The system of payments was not arbitrary, and Bosasa’s main criteria for payment was whether an official “would be supportive of Bosasa and, in particular, that they would ensure a tender would be awarded to, or retained by, Bosasa”.

“Mr Agrizzi estimated the total number of persons who would be paid by Bosasa monthly was in the region of 80, and he recalled a list of 38 government officials and employees who received bribes on a regular basis.”

Zondo has recommended that several Bosasa staff face corruption, fraud and money laundering investigations along with other companies and individuals who helped them.

The Zondo commission of inquiry into state capture has been able to corroborate some of the evidence that was presented to it by Bosasa whistleblower ...
Politics
4 months ago

Character Bosasa-nation: how Watson cosied up to JZ, Mantashe and more

From a cash-stuffed handbag to parties, monthly payments and groceries, this is how Bosasa lured the ANC, says Zondo
Politics
4 months ago