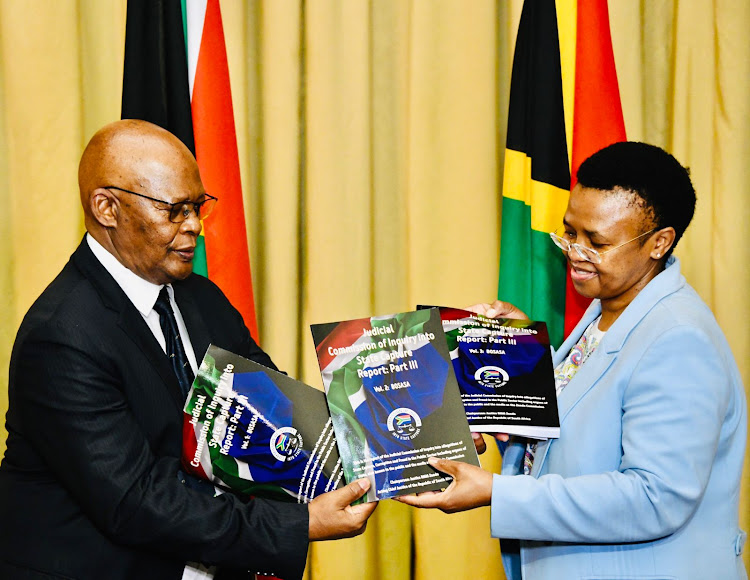 The third instalment of the state capture report released by inquiry chairperson Raymond Zondo to the presidency has been met with mixed reaction and questions online.

The report focuses on evidence related to the controversial catering and security company Bosasa.

It deals with evidence against senior ANC members — including former president Jacob Zuma, former minister Nomvula Mokonyane and mineral resources and energy minister Gwede Mantashe — who allegedly used their proximity to power and state resources to advance their corrupt activities with the company.

According to Zondo, authorities are likely to find evidence of corruption against Mokonyane. The inquiry relied on the explosive evidence by former Bosasa chief operations officer Angelo Agrizzi  to arrive at this conclusion.

Agrizzi testified before the commission that Mokonyane and her family received yearly Christmas groceries and monies from former CEO Gavin Watson, who also funded ANC events.

Mokonyane denied the allegations during her testimony and told the inquiry the groceries were for an annual event she hosted for a neighbouring community.

Mantashe, according to the report, was the man who stood between Bosasa and government tenders. The commission heard evidence during the public hearings that the minister benefited, among others, by way of home security upgrades from Bosasa.

The commission recommended further investigation of Mantashe in terms of the Prevention and Combating of Corrupt Activities Act (Precca).

“It sought to be able, through Mr Mantashe and the inducements and gain provided to him, to influence the leadership of those departments and organs of state, a leadership drawn almost exclusively from the ranks of the ANC and falling within the categories of public office bearers listed in the commission’s terms of reference,” read the report.

The report has been met with mixed response from those who have called for accountability for implicated individuals.

While some called for action to be taken against those implicated, others questioned if President Cyril Ramaphosa was investigated after he allegedly failed to declare his R500,000 donation from the controversial company.

Here are some of the responses on social media:

All four volumes on Bosasa? 😮‍💨
One of the people at the heart of the shenanigans, mind you, would have us believe he doesn’t deserve his day in court, not to mention the inside of a prison cell. https://t.co/lp2DuDbEtl

"The ANC must not use the Zondo Commission report to purge comrades. The report must be used to strengthen the unity of the ANC" - Gwede Mantashe, Jan 2022.

Anything on Cyril there by the Zondo report?

Zondo is really holding back the Eskom report 😂😂

Is there a person who is not iphara (thug) in ANC?

Zondo report is full of ANC people, no opposition members found in all 3 volumes

The third part of the state capture report deals exclusively with Bosasa, the catering and security firm owned by the late Gavin Watson.
Politics
3 months ago

If the ANC failed, so too would Bosasa — and this is why the controversial state contractor gave money and its own office space for the party's ...
Politics
3 months ago