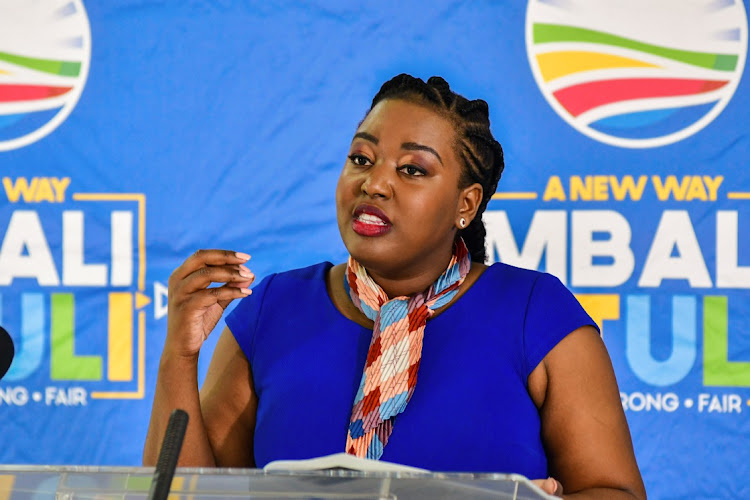 Prominent DA member and KwaZulu-Natal MPL Mbali Ntuli has officially quit the party after serving it in various structures for 15 years.

However, Ntuli will not be joining another political party.

Ntuli tendered her resignation as a DA member on Thursday. She stated the current political system and its existing parties were not focused on making SA the equitable and just country it needed to be.

Ntuli's post-DA plans include working with community leaders across the country to foster more socioeconomic and political change.

“It is therefore time for me to take a break from formal politics, get back on the ground and help real change makers make our country better. I am excited for what comes next, and am confident that the work ahead will bring me closer to my purpose. I look forward to informing you of how I plan to do this in the near future,” she said.

Ntuli has had a controversial 15 years in the DA, including public spats with federal council chairperson Helen Zille over her tweets.

Ntuli said she remains immensely proud of the work she has done during her time in the DA.

Speaking of “difficult and relentless challenges I have faced in the party”, Ntuli said the DA was not immune to gossip and she did not wish to rehash any of these challenges because they were publicly known and had been raised internally on numerous occasions.

“I have been forthright about instances where the DA has erred in its treatment of its members and the negative culture that is fostered within the organisation — my opposition of which formed part of my year-long campaign for DA leader in 2020,” she added.

Ntuli’s political career began at Rhodes University where, at age 19, she launched the DA’s first branch as a student, going on to grow the party across university campuses in SA. She also led the DA youth nationally.

Her resignation comes after a failed bid to lead the party nationally.

“It is my fervent belief in change that has guided my time as a public representative and community leader for more than a decade. It is what occasioned my bid to become the leader of the DA.

“Change is good. It provides an opportunity for reflection and renewal. It is in that spirit that I, today, inform you that I have formally tendered my resignation as a member of the DA and member of the KwaZulu-Natal legislature,” said Ntuli.

Some of her notable work in the DA includes building some of the first township branches in eThekwini, in rural KwaZulu-Natal (Mkhanyakude) and working as a DA staff member before becoming a public representative.

“I am proud of the many leaders recruited during that time, from across the country, who have grown to become formidable leaders in the organisation today. I relished the challenge of shining a spotlight on the issues affecting the youth during my tenure as youth leader — advocating for youth issues remains a passion of mine to this day.

“I came to the decision to step down as national youth leader in order to dedicate my full time to growing such a rural constituency. It was this dedication that resulted in the DA achieving a seat in every municipality in Mkhanyakude, a first for the DA, at the 2016 local government elections,” Ntuli explained.

Next weekend the opposition DA meets in a virtual conference to elect a new leadership. It is 99.9% certain that interim leader John Steenhuisen will ...
Opinion & Analysis
1 year ago

Before Mbali Ntuli announced that she was challenging the interim federal leader for the DA’s top job, it was almost unimaginable that a relatively ...
News
1 year ago

In 2018 Ntuli stepped down as MPL and helped the party to grow provincially. She took up a staff position for the DA in KwaZulu-Natal as the party's provincial campaign director.

She said her task was to help grow the DA’s support in the province and in the 2019 elections the party grew its support from 12.76% to 13.9% in KwaZulu-Natal, and subsequently increased the number of seats held by the DA in the KwaZulu-Natal legislature from 10 to 11.

She thanked the public for the three separate occasions where she was elected to serve SA under the DA banner adding that it was a privilege she never took for granted.

“I hope you know my resignation is not a betrayal of your votes and confidence in me, but rather a chance to renew my energies and find other ways to give back to my community,” she said.

Ntuli said she was excited about going back onto the ground to work with communities as they uplift themselves in keeping with the SA spirit.

“I am not lost to politics, I will be back but it is important for me to utilise my energy, passion and plethora of ideas to uplift communities I now cannot reach in my current role,” she added.

Mbali Ntuli on Helen Zille's tweets: 'It's partly why I'm running, so people get an alternative view of the DA'

Mbali Ntuli said the DA has more important issues to focus on, and that it is pointless to challenge Helen Zille and her controversial views.
Politics
2 years ago

Mbali Ntuli has a vision for a SA that is fair, tackles structural inequality and addresses injustices – and believes that under her leadership, the ...
Politics
2 years ago