EFF vs Operation Dudula: What you need to know about the EFF opening a case against Nhlanhla Lux Dlamini 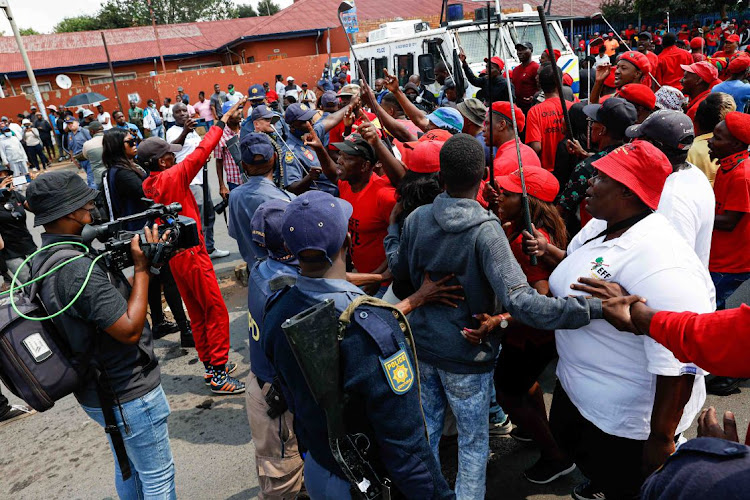 The party opened a case against Dlamini after allegations that members of the organisation attacked 59-year-old Soweto resident Victor Ramerafe to provoke the EFF.

On Wednesday, EFF members accompanied Ramerafe to open a case after members of Operation Dudula raided his home in Dobsonville and accused him of allegedly selling drugs.

The party’s spokesperson Sinawo Thambo said the allegations were baseless.

He said the attack had nothing to do with drugs or illegal immigrants, but was black-on-black violence.

Thambo also took aim at Dlamini, calling him a “toy soldier” who deliberately targets the vulnerable.

“This toy soldier, because he is a coward, has decided to attack the vulnerable and those who cannot defend themselves in order to push his own agenda.

“He is not from Soweto, they [his funders] bought him a house in Soweto because they wanted to disrupt the progress of the EFF in Soweto and create a parallel alternative that is going to make us fight among each other as black people, and not fight the system.”

EFF leader Julius Malema said members of his party needed to defend themselves and “triple” the force where self-defence is needed.

Dlamini denied allegations that he assaulted and intimidated Ramerafe or that the group had broken into his house, stolen items and vandalised it.

Operation Dudula member Cheese Kalakala accused the EFF of opening a case against the community by supporting the charges opened against Dlamini.

“We vote for them and they open a case against us? It is my first time in SA to see a political party opening a case against the community,” he said.

Kalakala said the group had received a tipoff from drug users who lived on the streets that drugs were sold at Ramerafe’s home before they raided it.

Speaking on eNCA earlier this week, Dlamini said while the organisation had made strides in ridding communities of illegal immigrants who were allegedly committing crimes, its efforts were hindered by corrupt police officials who allegedly accepted bribes instead of instituting arrests.

“When we had operation o molao, people were taken to Lindela [Repatriation Centre]. When they get to Lindela people disappear because they are drowning in corruption.

“We were discussing how we can help police and government so we make sure loose ends are tightened. Sometimes it is not government but that odd police officer who can’t think beyond his hand,” said Dlamini.

Swear words flew freely outside the Dobsonville police station as the EFF and Operation Dudula members went head to head.
News
4 months ago

While Operation Dudula members met over the weekend to report on their efforts to date, social media users compared leader Nhlanhla Lux Dlamini with ...
News
4 months ago