The ANC has requested that Msibi step aside, just days after he celebrated his election as ANC treasurer in Mpumalanga 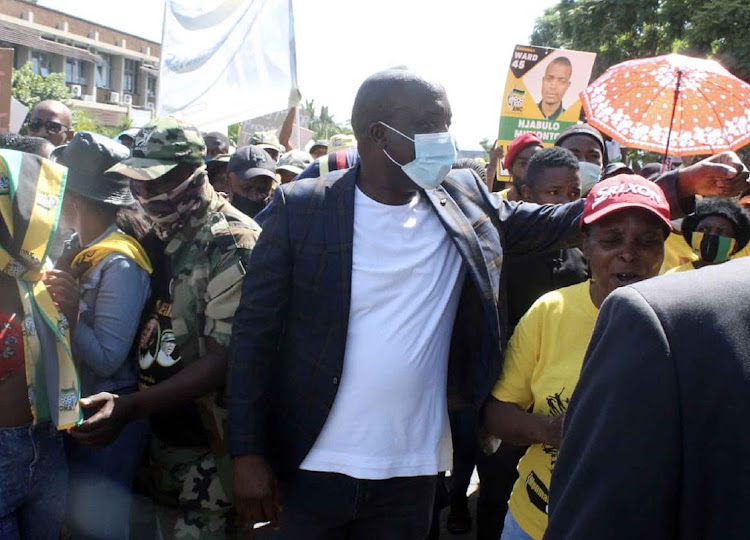 Former Mpumalanga MEC Mandla Msibi has been asked to step aside after being elected provincial treasurer at the weekend.
Image: File / Mandla Khoza

The newly elected treasurer of the ANC in Mpumalanga, Mandla Msibi, has been asked to step aside barely two days after being endorsed for the position.

Msibi faces charges of murder and attempted murder emanating from a shooting incident at a Mbombela eatery in August last year in which two people died. Shortly after being charged by the National Prosecuting Authority (NPA), Msibi was removed from his position as MEC of agriculture.

Mpumalanga premier Refilwe Mtshweni-Tsipane confirmed that Mandla Msibi, who has been charged with murder and remains in police custody, was removed ...
Politics
8 months ago

In a letter dated April 3, directed to Msibi and members of the provincial executive committee (PEC), ANC treasurer general Paul Mashatile reminded Msibi of the party’s implementation of national conference resolutions and NEC decisions regarding members charged with corruption and other serious crimes.

Despite Msibi facing charges, ANC politicians and structures in Mpumalanga had lobbied for him to contest the provincial treasurer position at the provincial elective conference at the weekend, which saw him elected in absentia.

“We remind you that the national executive committee at its meeting on 26-29 March 2021 reaffirmed the resolution of the 54th national conference that all its members who have been charged with corruption or other serious crimes must step aside, failing which they should be suspended in terms of rule 25.70 of the ANC constitution,” said Mashatile.

“Kindly confirm that your decision to step aside voluntarily on the terms and conditions outlined above remains in force,” he continued.

President Cyril Ramaphosa had at the weekend expressed concern at Msibi’s nomination and urged delegates to reflect on their decision.

President Cyril Ramaphosa's backer Mandla Ndlovu is the new provincial chairperson of the ANC in Mpumalanga.
Politics
2 months ago

“We need to demonstrates that indeed the ANC is serious about self-correcting, serious when it comes to dealing with matters of corruption, about the implementation of our resolution and issues such as stepping aside. We must demonstrate that we are truly serious.

“During the course of your election, you took the step of also endorsing and electing one of the comrades who is facing charges. Now, I know that you have reflected on this, and you are going to do further reflection. This matter does need your reflection as a disciplined membership of this organisation.

“Your reflection must also be based on the decisions that have been taken by the NEC, which is the highest decision-making body between conferences in the form of democratic centralism. Now I call you to reflect on this matter.”

Ramaphosa further added that the national executive council also needed to discuss the matter as Mpumalanga had not been the only province faced with the issue of implicated leaders.

“The issue of renewal is a process and as we go through this process we learn from some of the things that we continue to do ... Let us not downplay the progress we are making,” Ramaphosa said.

Murder-accused Mpumalanga politician Mandla Msibi will be allowed to contest for a leadership position at the ANC's provincial congress this weekend ...
Politics
3 months ago

The ANC Mpumalanga elective conference is being interdicted in court a day before it is meant to sit.
Politics
3 months ago