Pandor hits back at critics, says SA’s non-aligned position does not mean it condones Russia 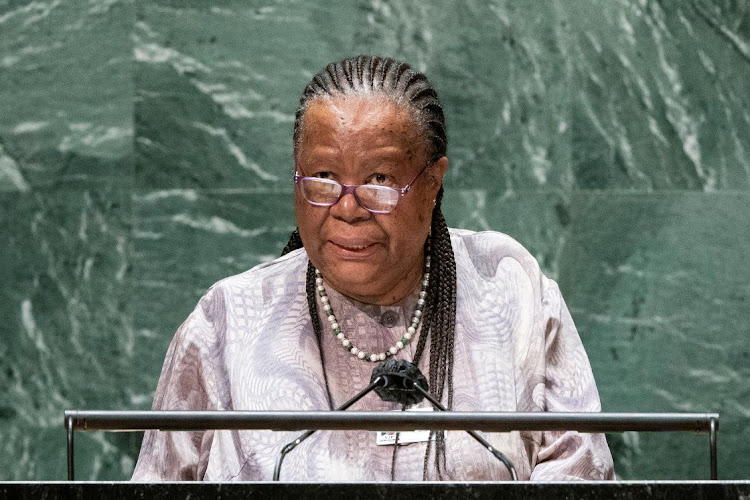 Department of international relations and cooperation (Dirco) minister Naledi Pandor has clapped back at critics who attacked SA’s non-aligned position on the ongoing war between Russia and Ukraine.

“We, along with other non-aligned countries, have sought to assert our independence from the power games of the wealthy nations, seeking not to become embroiled in the politics of confrontation name-calling and aggression, but rather to promote a peaceful resolution to the conflict through dialogue and negotiation,” Pandor said on Thursday.

Speaking during the 2022 Heads of Mission conference at the Dirco headquarters in Pretoria, Pandor said the war in Ukraine had altered the geopolitical landscape of the global community.

Pandor was speaking just hours before SA again chose to abstain in a crucial vote against Russia by the UN General Assembly, which sought to suspend the country from the UN Human Rights Council.

Following the vote on Thursday, most voted for Russia’s suspension.

The UN General Assembly on Thursday suspended Russia from the UN Human Rights Council over reports of "gross and systematic violations and abuses of ...
News
2 months ago

When the war broke out, Pandor called for the withdrawal of Russian troops from Ukraine while President Cyril Ramaphosa called for a peaceful and negotiated resolution.

However, on Thursday Pandor and Ramaphosa presented a united front when they addressed a gathering of SA’s head of missions abroad.

Pandor said: “We convene at a time of somewhat tectonic shifts in global affairs, most notably since the Russian Federation used force without sanction by the UN Security Council (UNSC) in Ukraine on February 24.

“We have witnessed somewhat of a realignment of global power relations in response to the war, and seen increased volatility in the global economy.”

She said government was “fully cognisant of the deliberate opposition to our call for peace and negotiations but we continue to hold the view that negotiations will end the conflict”.

SA has always opposed the violation of the sovereignty and territorial integrity of member states of the UN, said Pandor, adding: “We wish they had joined us when we called for the sovereignty of Palestine.

“We have held these views, not just for this war, but with respect to the infringement of the rights of the people of Palestine and many other countries where sovereignty is not respected.”

Echoing Ramaphosa’s sentiments, she also called for the overhaul of the UNSC.

She said a rules-based multilateral system was urgently needed more than ever before.

“We believe major powers should not be allowed to violate international law with impunity. What the war in Ukraine has also exposed is the glaring double standards of the international community.”

Andre Groenewald has recounted his experiences of the war, including that of a student who had never left SA
News
2 months ago

She said the world had never seen “concomitant actions” with regards to other conflicts, including those where the laws of war and the UN charter have also been breached.

“We believe there needs to be consistency in the approach of the international community to countries that violate international law. When Israel launched sustained offensive military operations against the Gaza strip, killing hundreds, flattening homes, burying civilians under the rubble and devastating the already dilapidated infrastructure in such a small and densely populated area, the world failed to respond in the same way as it has on Ukraine.”

That military aggression was not met with sanctions, isolation and a divestment campaign, she said.

Taking a swipe at some media houses which had not been fair in their coverage if the war  she said: “We are also worried at the mainstream media narrative which has tended to support the actions of the big powers as they have seemingly become part of orchestrated propaganda campaigns, either actively at times or unconsciously.

“It is important that we as diplomatic representatives redouble our efforts to explain to the SA public and our friends what drives our foreign policy. We also need our senior diplomats to speak with one voice and defend government’s position on these issues so we avoid confusion and mixed messaging.

“I have been quiet astounded at the manner in which diplomats representing SA have publicly attacked our policy positions in a manner that implies we are merely a subject to be instructed.”

President Cyril Ramaphosa is opening the Heads of Mission Conference in Pretoria on Thursday.
Politics
2 months ago

“The conflict has exposed the inability of the UNSC to fulfil its mandate of maintaining international peace and security. The formation of the UNSC is outdated and unrepresentative because it disadvantages countries with developing economies.

“Decision-making needs to be democratised so the council can be true to its mandate and move beyond the paralysis brought about by a few member states. Powerful countries must no longer be allowed to disregard international law.”

He said SA would continue to defend its non-alignment position and independent foreign policy.

“Our fundamental responsibility as a global community is to ensure the human suffering in Ukraine is brought to an end, and that a sustainable and just peace is achieved.

“As a global community, we have an equal responsibility to bring a decisive end to human suffering in Yemen, Palestine, Libya, Mali, Somalia, South Sudan, Mozambique and the Eastern DRC.”

Do you agree with the stance?.
News
3 months ago

The minister said fuel price increases are informed by local and international factors including the Russia-Ukraine war which has affected prices ...
News
2 months ago