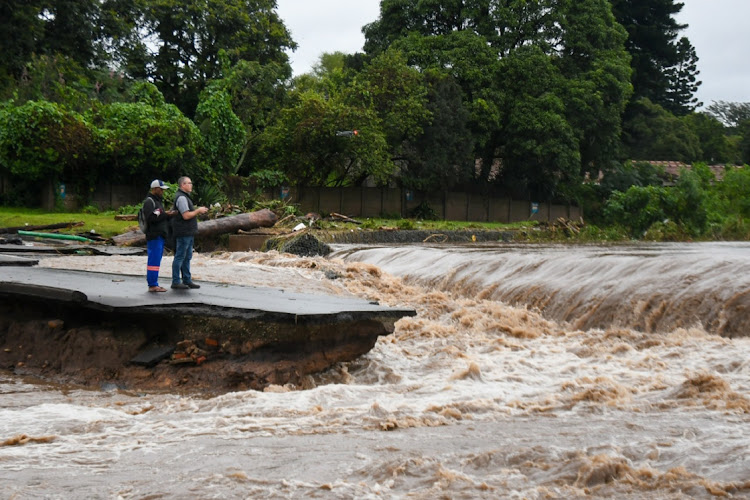 Part of Caversham Road in Pinetown was washed away on April 12 2022.
Image: Gallo Images/Darren Stewart

The recent devastating floods in parts of KwaZulu-Natal and the Eastern Cape are the “worst floods we have ever seen in living memory”, co-operative governance and traditional affairs (Cogta) minister Nkosazana Dlamini-Zuma said on Tuesday,

KwaZulu-Natal had between 300 and 400mm of rain over a 24-hour period, which was a rare occurrence even in the wettest months, she said.

Dlamini-Zuma said this had been an indication of climate change which scientists had previously warned the government about.

“Clearly climate change is with us and we are beginning to feel the effects.”

Cogta minister Nkosazana Dlamini-Zuma has gazetted regulations for the national state of disaster prompted by devastating floods in KwaZulu-Natal and ...
Politics
3 months ago

Explaining this, Dlamini-Zuma said floods had taken place in more than one province and their effect would be felt across the country.

“The impact of these floods are well beyond the province and so it became very important that the national government comes on board. The reclassification from a provincial to a national disaster was then followed by the declaration of the  state of the nation disaster.

“The declaration, in a way, gives hopes and also is a vessel for co-ordination and rallying the entire nation, government and also international support. It means that the primary responsibility to co-ordinate and manage the disaster is now assigned to the national sphere of government,” she said.

Dlamini-Zuma said the reclassification was an indication of the government’s commitment to implement recovery and reconstruction plans in a holistic manner as all spheres would be working together.

The minister said this had been a season of darkness and winter of despair. “But at the same time, it is also the season of light, spring and hope because we have to be hopeful, committed and determined to deal with this.

“As we build back, we should be building back better. Nobody should build back in the river banks, in flood [plains] and also in some of the areas which are geographically not right for residential areas. We must build better,” she said.

Dlamini-Zuma has gazetted regulations for the national state of disaster, which are expected to be in place for three months. However, if a need arose, it could be terminated early or extended, she said.

Minister of co-operative governance and traditional affairs Nkosazana Dlamini-Zuma is expected to brief the media on Tuesday on the national state of ...
Politics
3 months ago

SA-born Hollywood actress Charlize Theron, who maintains ties with SA through her charitable work, has launched a fundraiser in support of flood ...
News
3 months ago