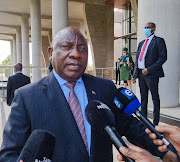 Image: Amanda Khoza President Cyril Ramaphosa has thanked those who have been working on the ground including the army, police, health and social workers, to assist the people of KwaZulu-Natal who were affected by the recent floods that claimed the lives of more than 400 people.

President Cyril Ramaphosa on Friday said there was no indication that two days of rain could lead to the catastrophe that resulted in the deaths of more than 400 people in KwaZulu-Natal.

“I think as the rains were coming down and as we could read the weather indicators, we didn’t even begin to imagine that we would have up to 300mm of rain in two days.

“In SA we usually get about 464mm on average in the whole country and KZN gets slightly more but no one ever really predicted that it would have been as much as 300mm in such a short space of time,” he said.

Ramaphosa was responding to a question about possible warnings that could have possibly saved lives shortly after hosting the fifth session of the SA-Botswana binational commission in Pretoria on Friday.

He used the opportunity to thank those on the ground who were helping to recover bodies and assist in  many other ways.

“I am grateful for the many people that are working out there. Many ministers should have been here but they are out there. There are many of our officials who are busy in KZN.

“I think we should be grateful for the work that is being done by the soldiers, police officers, health workers, social workers and many other people. It is work that needs to be done,” he said.

WATCH: On #KZNFloods: President @CyrilRamaphosa says there was no indication that two days of rain would have cause this amount of damage. @TimesLIVE pic.twitter.com/4825n0keh3

He assured the country that it would overcome the tragedy.

“This has come as a real setback for us because there is infrastructure rebuild and there is reconstructing the lives of people and relocating them. But we are South Africans, we will get over this as much as it is a setback and a very sad one for that matter,” said Ramaphosa.

On Thursday TimesLIVE reported the government had revised the death toll in the floods from 448 to 435.

Police minister Bheki Cele said 13 people initially included in the total had died from unrelated causes. Autopsies showed some bodies had bullet wounds and nine people died of natural causes. Of the four bodies with bullet wounds, three were from Pinetown and one from Sydenham.

KwaZulu-Natal police commissioner Nhlanhla Mkhwanazi said police had found many bodies during the floods and were under the impression that all the people had died as a result of flooding.

Cele urged people not to “plunder or steal” resources meant for flood victims.