SA concerned about developments in Jerusalem 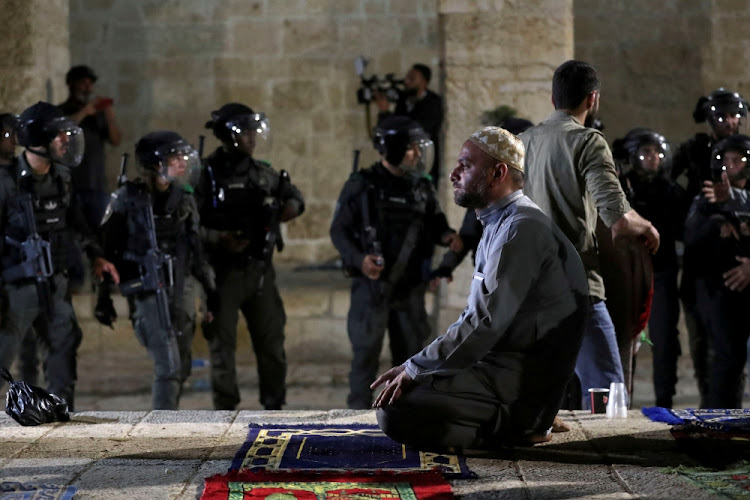 A Palestinian man prays as Israeli police gather during clashes at the compound that houses Al-Aqsa Mosque, known to Muslims as Noble Sanctuary and to Jews as Temple Mount, amid tension over the possible eviction of several Palestinian families from homes on land claimed by Jewish settlers in the Sheikh Jarrah neighbourhood, in Jerusalem's Old City on May 7 2021.
Image: REUTERS/Ammar Awad

The SA government on Sunday condemned the increased violence and heightened tensions in Jerusalem, particularly at the Al Aqsa Mosque, and the restrictions placed on religious sites, including the Church of the Holy Sepulchre.

The department of international relations and co-operation said in a statement: “We strongly condemn the attacks against Palestinians, especially at a time of religious importance for all faiths in the region.

“We appeal to the government of Israel to allow Palestinians their right to worship and gather for prayers in peace. We reaffirm that the holy sites in Jerusalem and the status quo around these sites must be respected.”

The statement, issued by spokesperson Clayson Monyela, said: “These blatant violations of human rights and international law, which have been taking place for more than 70 years should no longer be condoned and the international community, including the UN Security Council that is tasked with maintaining international peace and security, must act to ensure that states are held accountable for their actions.”

“SA is committed to being part of international efforts aimed at reviving a much needed political process that will lead to the establishment of a viable Palestinian state existing side by side in peace with Israel, and within internationally recognised borders that include sovereign equality between states,” Dirco said.

It called for efforts to find a solution that would enable people on both sides of the Green Line, in Israel and the Occupied Palestinian Territories, to live free of violence under conditions free from racism and discrimination of any kind.

At least 31 Palestinians were injured in clashes with Israeli police at Al-Aqsa mosque compound in Jerusalem on Friday, Palestinian medics said, the ...
News
3 weeks ago

President Cyril Ramaphosa on Friday said he was willing to make a visit to war-torn Ukraine. This after President Volodymyr Zelensky extended an ...
Politics
3 weeks ago

Botswana’s president Mokgweetsi Masisi has called on SA law enforcement agencies to work with their Botswana counterparts to deal with crimes ...
News
3 weeks ago