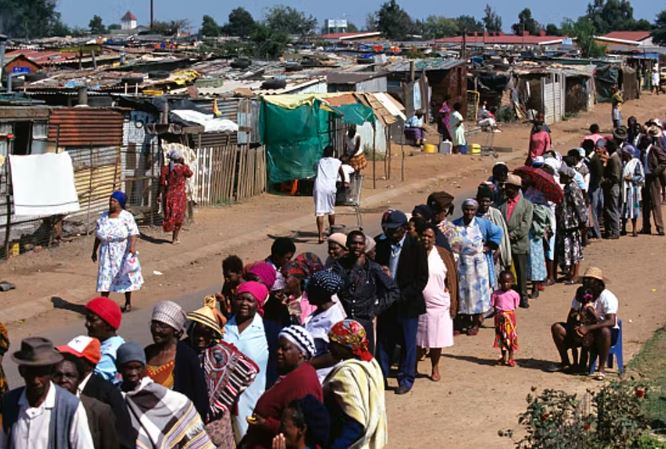 On 27 April 1994, South Africans from all walks of life voted in the first democratic elections. This was after many years of disenfranchisement of black people in South Africa. This day therefore marked an important democratic breakthrough in the history of the country.

The day, which has been declared Freedom Day, is therefore worthy of commemoration. It has been declared a public holiday to accentuate its historical significance related to the country’s democratic breakthrough.

But has a good society come about in the post-apartheid South Africa because of the 1994 democratic breakthrough?

With surging socioeconomic disparities, the anniversary of the country’s democracy makes this question apposite. In other words, is this day still worthy of commemoration? The answer to this question is not linear but a function of how various epochs fare towards creating a good society – a process of perpetual evolution marked by distinct milestones.

A good society creates opportunities for its people. That doesn’t require it to be faultless. No democratic revolution has created a faultless society. However, when those faults start to cause misery in people’s lives, democracy faces the risk of turning against itself. And the days that mark its anniversary often create incendiary moments where the grimace of discontent – particularly on the faces of those who are in the margins of society – finds expression.

Is this what South Africa’s Freedom Day has become? In other words, almost three decades of democracy the existential question remains: what does this day mean?

The answer does not lie only in the history of Freedom Day, but in what has come out of it.

A day for reckoning and accountability

Surging socioeconomic disparities affront the very notion of a good society. Poverty, unemployment and inequality have become persistently stubborn features of the post-apartheid South Africa. They have earned the country the infamy of the most unequal society in the world.

Eighty percent of the country’s wealth continues to be owned by only 10% of the population. Income inequality is grossly skewed, and poverty levels are surging. Latest data on unemployment for the fourth quarter of 2021 shows that South Africa’s unemployment rate at 35.3% has reached a historic high. This is concentrated largely in the youth population of the country where about 30 million people, using the household poverty line of R992 per month, are living in poverty.

None of this bodes well for the meaning of Freedom Day.

For those who bear the brunt of these socioeconomic hardships, the 1994 democratic breakthrough has spawned unfinished business of democratisation.

It failed to disentangle “the deep-seated underlying structural causes of economic stagnation that have developed over hundreds of years of slavery, colonialism and apartheid”.

Various interventions to ensure social equity and economic fairness, particularly for those who were historically marginalised, got lost in translation where transformation has spawned a few black elites and middle class but not socioeconomic justice especially for those who are in the lowest strata of society.It is because of this that Freedom Day is becoming increasingly derided by many in the cynicism which has percolated into a grievance. It is often scoffed at with the intimation, whose freedom is it anyway?

In a democratic society this question is not inappropriate. It is worrisome as it has the potential to delegitimise Freedom Day and therefore desecrate history.

The process of establishing a democratic system in South Africa involved establishing political and governance systems based on the supremacy of the constitution and the rule of law, where equality became one of the organising principles of the post-apartheid society. A social compact was forged. And, hallmarking this was the inclusion of socioeconomic rights in the constitution, and the political and legal mechanisms to enforce them.

This placed an obligation on the state to maximise access to resources, opportunities and services for particularly those who are vulnerable and poverty-stricken in the margins of society.

The constitution of the Republic of South Africa is an integral part of the continuum of the 1994 democratic breakthrough and therefore ought to go into the meaning of Freedom Day, but not as the ultimate measure of achievement. Of critical importance for the meaningfulness of the day are the democratic dividends which should spawn a good society.

A democratic breakthrough not followed by socioeconomic justice makes freedom hollow. This is what the grimace of public discontent says about Freedom Day and should be heeded – not with hubris or the veneration of the country’s constitutional system, but with a renewed sense of commitment to optimise the opportunities which the evolution of the post-apartheid society creates for the correction of its faults.

And this is the urgent task of the epoch which must start with the vigour to implement the National Development Plan, a document released a decade ago that set out what South Africa needed to do to address its many ills with a target date of 2030.

In my view it continues to be the most comprehensive framework for socioeconomic transformation. In addition, it was embraced by all political parties. However, its recommendations have not been followed through earnestly.

This needs to change because the plan offers an important opportunity for the correction of the post-apartheid state.

Memorable days in the history of this country like Freedom Day are important for social cohesion. However, their meaningfulness lies in doing the right things related to reinventing the state in order to shore up its capacity to exist for the good of society. Lest they create platforms for the wrath of the poor rather than for active citizenry.