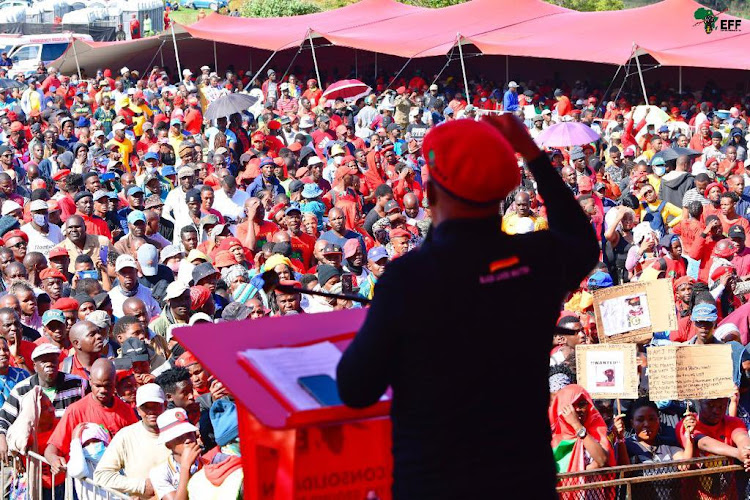 The status quo makes the celebration of Freedom Day nothing but an exercise aimed at pacifying the consciousness of the people, EFF leader Julius Malema said on Wednesday.

Addressing an EFF Freedom Day rally in Tshwane, he said the day called for people to celebrate their liberation and forget the present social decay confronting them.

Malema reiterated the long-standing view of his party that as long as blacks remained landless and without control of the economy, there would be no freedom to celebrate.

28 years later, the majority black population remains in space-less townships, packed in shacks on top of one another, with little access to drinkable water, education, sanitation and housing. #EFFFreedomDayRally pic.twitter.com/XLiz69VrWQ

He said political freedom without economic freedom is meaningless.

In a statement, the red berets said SA has operated on a false premise of unity and social cohesion, without economically altering the ownership of the means of production.

“We thus have a façade of a democracy, coupled with a non-event of independence, because our political freedom was characterised by a negotiated settlement in which the perpetrators of the heinous crimes of apartheid were never held accountable,” the party said.

It said the majority of mines remain controlled by foreign interests, while the banks, financial sector and JSE, are in the firm grip of a white-settler community.

“Due to this, the political freedom obtained in 1994 has become meaningless, because those who control our economy have ultimately determined our political and economic trajectory. The policies of SA are crafted in Washington and by an elite group of financial institutions, who stand to benefit the most from the disenfranchisement of African people.”

The party said the majority black population remained in crowded townships, packed in shacks on top of one another, with little access to drinkable water, education, sanitation and housing.

It described the life of a black person in SA as one of squalor, defeat, hopelessness and landlessness.

“And accordingly we are the most susceptible to disease and tragedy.”

[MUST WATCH]: CIC @Julius_S_Malema telling Fighters that we need to reclaim our streets, because criminals have taken over and normalised their criminal activities. #EFFFreedomDayRally pic.twitter.com/lDpZ6l9yLs

The EFF recommitted itself to seven non-negotiable cardinal pillars enshrined in its founding manifesto, which it said would usher in economic freedom.

— Expropriation of land without compensation for equal redistribution.

— Nationalisation of mines, banks, and other strategic sectors of the economy, without compensation.

— Building state and government capacity, which will lead to the abolishment of tenders.

— Massive protected industrial development to create millions of sustainable jobs, including the introduction of minimum wages to close the wage gap between the rich and the poor, close the apartheid wage gap and promote rapid career paths for Africans in the workplace.

— Massive development of the African economy and advocating for a move from reconciliation to justice in the entire continent.

— Open, accountable, corruption-free government and society without fear of victimisation by state agencies.

Long walk to freedom has got a good deal rougher of late, says Ramaphosa

The scourge of gender-based violence and femicide in SA leaves no room to celebrate Freedom Day for women and girls in the country, Amnesty ...
News
4 weeks ago

EDITORIAL | The sins of the fathers: Freedom Day is a hollow reminder of our leaders’ failings

Almost three decades on, our government has let down those who needed freedom the most
Opinion & Analysis
4 weeks ago