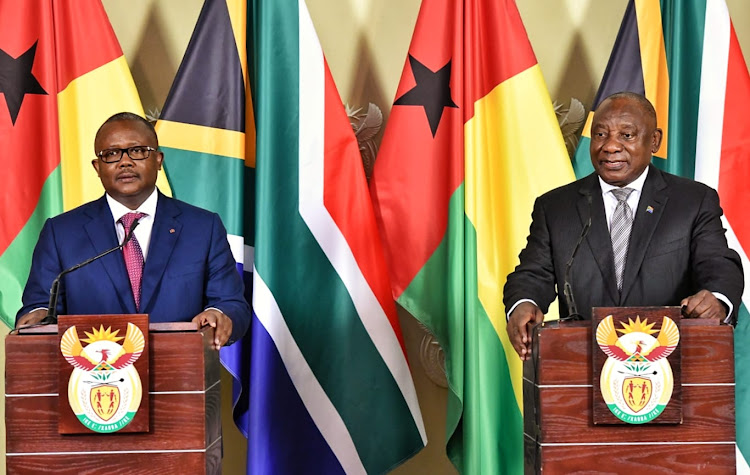 President Cyril Ramaphosa and President Umaro Sissoco Embaló of Guinea-Bissau brief the media on the outcome of their official talks at the Union Buildings on Thursday.
Image: GCIS

Ramaphosa hosted Embaló on a state visit at the Union Buildings in Pretoria on Thursday.

Addressing the media after their discussions, Ramaphosa said both countries enjoyed “cordial political relations and the visit has given an opportunity to consolidate the relations which we have had over a long time”.

During their discussions, the leaders condemned the attempted coup which took place in February. “This runs contrary to the effort to silence the guns on our continent. We expressed our concern at the resurgence of the unconstitutional change of government in various parts of our continent. It is of great concern to both our countries that conflicts are continuing in several parts of the continent,” said Ramaphosa.

Ramaphosa added that the goal for the state visit was to deepen trade investment between the two countries. “We have communicated to President Embaló that we would like to see more South African companies being able to do work in Guinea-Bissau as they develop their country from an agricultural and infrastructure point of view.”

Addressing drug trafficking, President General Umaro Sissoco Embaló, of Guinea Bissau, concedes that his country has had a bad reputation of peddling drugs. He says his visit aims to address these matters. @TimesLIVE pic.twitter.com/02TmoU8n1V

In turn, Ramaphosa said companies from Guinea-Bissau should be able to operate in SA if they wish to do so. “Guinea-Bissau has provided a very conducive environment for South African companies that work in Guinea-Bissau.”

Companies from both countries have been encouraged to take up the opportunities in the economic spheres.

Embaló addressed the perception that his country was infamous for peddling drugs.

“In Guinea-Bissau we had a bad reputation in the past because we are very far away from South America. There was a problem of drug trafficking, but today I don’t think that we have this pandemic because we have already [been] fighting them and telling them to go back to where they come from,” he said.

He said the visit provides an opportunity for SA to share its experience on managing the situation with Guinea-Bissau.

Asked to share what they discussed on coups, Embaló said West Africa was known to have a problem with unconstitutional change of governments. “Today in Guinea-Bissau, I have some troops from Economic Community of West African States (Ecowas) and they will do the same for other countries.”

President Cyril Ramaphosa on Thursday hosts his counterpart President Umaro Sissoco Embaló of Guinea-Bissau on a state visit at the Union Buildings ...
Politics
3 weeks ago

Ramaphosa said: “I think the continent is moving and maturing towards a state where tolerance and acceptance of coups is now a thing of the past. The AU has taken a very clear and strong position on this and I think that it sends a very strong message to those who would want to perpetrate coups that they will have no place to hide.”

The Southern African Development Community (Sadc) region has been relatively fortunate to have stability, he said. “The only sense of instability has been Mozambique in Cabo Delgado with insurgence, and Lesotho has largely been resolved and is moving forward with elections and reforms, and that in many ways behoves very well for stability.”

He said the guns should be silenced sooner.

On the raging war between Russia and Ukraine, Ramaphosa emphasised SA’s call for negotiations. “I have had the occasion to speak to presidents [Vladimir] Putin and [Volodymyr] Zelenskyy and their discussions and meetings is something that we believe is a step in the right direction.”

In his discussions with both presidents, Ramaphosa said he stressed that the conflict should be resolved through dialogue.

“We are hoping, wishing and praying that it should lead to an agreement that will lead to the cessation of hostilities and the end of the conflict.”

"President  [Ian] Khama is here on a visit, so we are not perceived as harbouring a person who is a fugitive," says President Cyril Ramaphosa.
Politics
1 month ago

Botswana’s president Mokgweetsi Masisi has called on SA law enforcement agencies to work with their Botswana counterparts to deal with crimes ...
News
1 month ago

International relations and co-operation minister Naledi Pandor and her counterpart from Botswana, Lemogang Kwape, used the first day of the ...
Politics
1 month ago