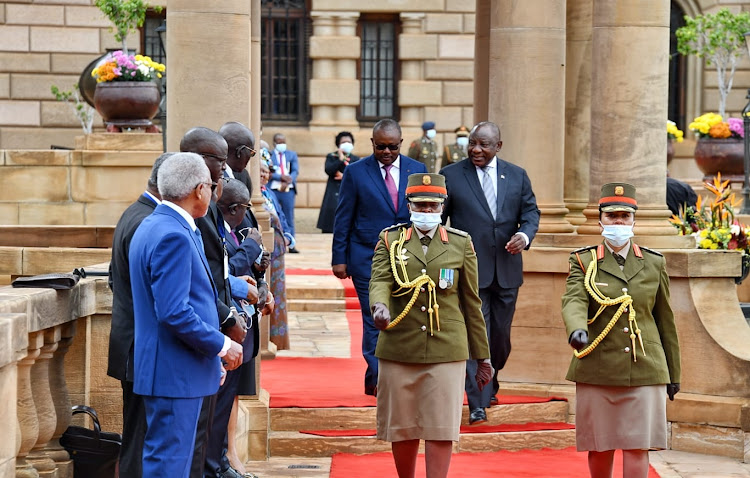 President Cyril Ramaphosa is hosting Umaro Sissoco Embaló, president of Guinea-Bissau, on a state visit at the Union Buildings in Pretoria.
Image: GCIS.

President Cyril Ramaphosa on Thursday is hosting his counterpart President Umaro Sissoco Embaló of Guinea-Bissau on a state visit at the Union Buildings in Pretoria.

Ramaphosa said the visit further strengthens the solidarity and friendship between the two countries.

“We meet as the world is counting the costs of Covid-19. We have the arduous task of rebuilding our societies, economies and our people’s livelihoods. Africa’s recovery depends on more of our people getting vaccinated against Covid-19.

“It is our hope that we will be able to explore further opportunity for investments by SA companies in Guinea-Bissau in areas such as agriculture, mining, energy, manufacturing as well as in infrastructure.”

Such investments would benefit both countries and provide local companies with new opportunities.

This visit also provides an opportunity for both countries to discuss positions to champion at the upcoming AU summit on May 28 on terrorism and violent extremism.

“It is important for our two countries to champion the cause of peace and development for the continent at large.”

He condemned the attempted coup in Guinea-Bissau in February.

Responding, Embaló offered his condolences to the people of KwaZulu-Natal after the devastating floods which claimed the lives of more than 400 people and left many displaced.

Botswana’s president Mokgweetsi Masisi has called on SA law enforcement agencies to work with their Botswana counterparts to deal with crimes ...
News
1 month ago

He was looking forward to discussing matters of common interest including fisheries, technology and oil exploration.

International relations and co-operation minister Naledi Pandor said:  “We are rebuilding historical ties with Guinea-Bissau who played an important role in supporting the liberation movement in training and posting of our freedom fighters.”

“We brought a strong delegation of ministers from different sectors so that we can intensify our co-operation in health, energy, defence and count on each others’ knowledge. This is important for the benefit of our economies and the development of our relations in the future.”

The presidency said the general co-operation agreement between the two countries signed in September 2008 laid the foundation for launching a bilateral commission.

"President  [Ian] Khama is here on a visit, so we are not perceived as harbouring a person who is a fugitive," says President Cyril Ramaphosa.
Politics
1 month ago

President Cyril Ramaphosa on Friday said he was willing to make a visit to war-torn Ukraine. This after President Volodymyr Zelensky extended an ...
Politics
1 month ago

International relations and co-operation minister Naledi Pandor and her counterpart from Botswana, Lemogang Kwape, used the first day of the ...
Politics
1 month ago