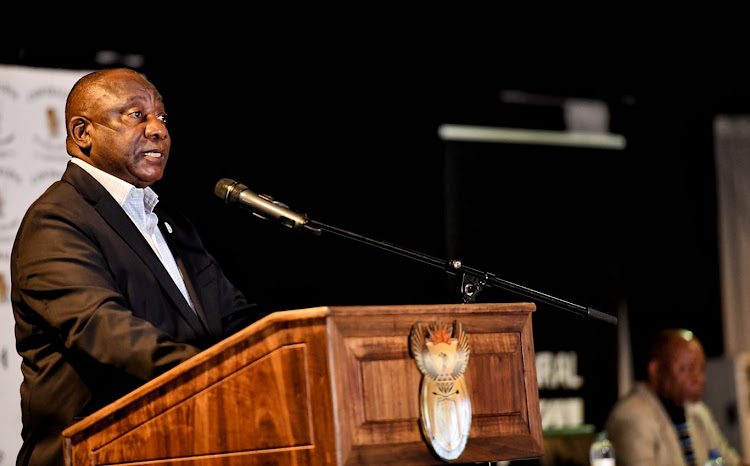 President Cyril Ramaphosa told traditional leaders at the eighth elective conference of the Congress of Traditional Leaders of SA in Boksburg that the government will address the issues they raised.
Image: GCIS.

Disputes within royal families, which sometimes lead to the destabilisation of kingdoms and communities, must be resolved, says President Cyril Ramaphosa.

“We need to work together to ensure that our different customs and customary laws of succession are observed,” Ramaphosa told the eighth elective conference of the Congress of Traditional Leaders of SA (Contralesa) in Boksburg.

His comments follow a succession scandal in the Zulu royal house after the death of King Goodwill Zwelithini in March 2021.

The fight for the throne has been playing out in court as some of Zwelithini’s wives and his children challenge the installation of Prince Misuzulu as king.

In March, Ramaphosa formally recognised Misuzulu as the king, paving the way for his coronation. But the ceremony has been delayed by KwaZulu-Natal's floods.

“I counted 26 issues which included that there are traditional leaders which are removed from their positions without cause. They said land parcels should be transferred to land authorities and about 828 traditional councils that are now defunct and rundown.

“They said the roads that lead to great places leave much to be desired as many of them are not navigable and Cogta (the department of co-operative governance and traditional affairs) doesn’t have the budget to assist traditional leaders to provide services to the people.

“They complained that they do not see where Cogta’s budget goes, as well as that the infrastructure in rural areas leaves much to be desired. They also added that there is disparity in the treatment of traditional leaders, with some treated better than others.”

Traditional leaders also told Ramaphosa they want the government to turn their stipends into salaries and to remunerate their spouses.

Ramaphosa honoured with the status of chieftaincy in Ivory Coast

When boards of state enterprises are set up, there should be a way of including them, and they want the government to set up a special court to resolve issues in traditional areas, said Ramaphosa.

“They also raised an important issue on the spate of killings of (33) traditional leaders and want a commission to be set up to investigate this. They also want initiation schools to be formalised and said there are a number of illegal immigrants who enter their areas and do all manner of things.”

He said he had established an interministerial task team chaired by Deputy President David Mabuza to focus on the resolution of matters raised by the traditional leaders.

“The matters are being handled, much as you have expressed your anger, frustration and annoyance. I want to assure you that these matters are being addressed ... we may not be able to reach an agreement on all the issues, but there is nothing that is going to be swept under the carpet.”

Ramaphosa said he wants the issues to be addressed so traditional leaders can assist the government with developmental issues.

KZN to mark anniversary of the death of King Goodwill Zwelithini

The KwaZulu-Natal government will hold a prayer to commemorate the one-year anniversary of the death of King Goodwill Zwelithini at the ...
News
2 months ago

President Cyril Ramaphosa has established an interministerial task team to comprehensively respond to issues raised by traditional and Khoi-San ...
Politics
2 months ago

MPs have paid tribute to one of the founding members of the Eastern Cape House of Traditional Leaders, Nkosi Ngangomhlaba Matanzima, who died on ...
News
2 months ago