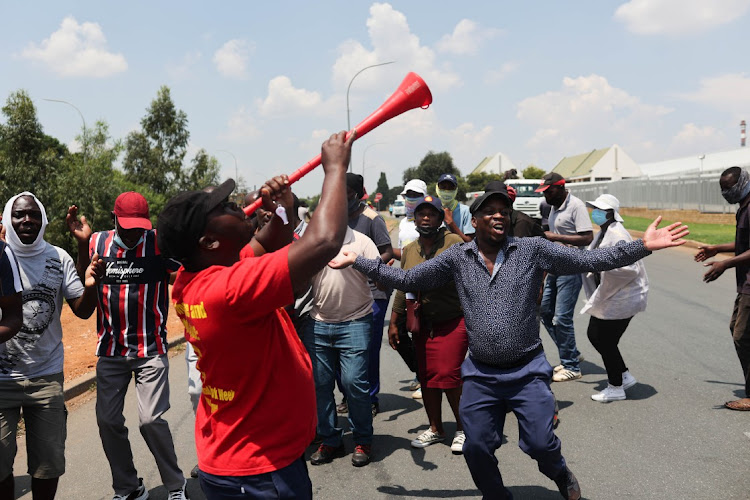 The 2022 May Day celebration will go down in history as one that requires a consequential departure from patronage by worker unions.. File photo.
Image: Alaister Russell

As the country celebrates International Workers' Day in a sea of record high unemployment of 35% overall, for young people, the question that begs to be asked is: has this democracy managed to cushion workers against the natural wrath of capitalism?

One of the cardinal gains of workers out of the Codesa process (Convention for a Democratic SA in the early 1990s) remains that of securing the right to collective bargaining. In theoretical terms, workers have principles to celebrate, but in real terms, their capacity to collectively bargain has over time been compromised by jobless growth cycles that eventually became stagnant.

The 2022 May Day celebration will go down in history as one that requires a consequential departure from patronage by worker unions. As unemployment figures grow, crime and criminality are rewarded, public infrastructure is collapsing, disposable income is raided by fuel increases and their attendant inflationary impact, and a government that does not inspire any hope of change in sight. Current efforts to reverse the declining voter confidence in the ANC appear woefully inadequate.

Compounding the worker frustrations might be the release of the Zondo commission report, which is as fraught as its drama-filled hearings.

The state of paralysis, also exacerbated by the loss of influence in the local state, will make any effort at recovery to liberation movement glory days, require the best of its cadres to regroup and give direction.

The governing ANC-led tripartite alliance is in the throes of a fully-fledged political legitimacy crisis with declining voter confidence in its ability to govern, and this is making its leadership at the branch and shop floor level lose requisite confidence to inspire hope for the future.

The state of paralysis, also worsened by the loss of influence in the local state, will make any effort at recovery to liberation movement glory days, require the best of its cadres to regroup and give direction.

Areas of private sector growth were becoming more and more casualised with labour brokers taking over the employer roles. The exit of Numsa out of Cosatu and the decline in influence of NUM in the growing platinum-based group of metal-based industries, meant the traditional working-class rhetoric and sense would be left to workers that are traditionally middle class.

Public sector workers are part of the state bureaucracy. In fact, bureaucrats are the mind, and in several ways the machinery, of the state. Their posture as a working class will always have the contradictions of who is it that needs to be antagonised at relations level, without compromising the patriotism expectations everyone has of public sector unions.

The theme of the 2022 May Day celebrations is “building strong, vibrant and militant unions that service members”. This theme is constructed upon a context of a need to renew and rebuild the entire governing tripartite alliance to be responsive to societal expectations of it.

Dwindling memberships, inter-union rivalry and radical changes in the nature of work could render trade unions irrelevant, and Workers’ Day will ...
News
2 weeks ago

The brute logic is that if there is an allegation of corruption being rife in the government, it follows that it can only be those that work in government that are corrupters.

While there is some truth in the possibility of the anti-corruption drive resuscitating support, and potentially transformation of its internal political dynamics, the cost of dislodging from an established patronage system as currency for the governing ANC-led alliance upward mobility, has to date choked the integrity of the very renewal and rebuilding programme.

The inevitable transition to a corruption-proof governing alliance will reconfigure a substantial part of how it has been conducting politics since its unbanning and formalisation as a political coalition contesting for state power through the agency of government.

Relentless pursuit of this anti-corruption posture independent of a social justice-based transformation programme has now shaped the governing alliance renewal and rebuilding programme to be tradable with how anti-corruption is supported. Far from fostering comity and co-operation between the warring ideological factions about anti-corruption as a platform for renewal and rebuilding, its drive has instead been delayed sufficient enough to produce new forms of leadership contestation and warring factions before any unity about and for renewal can be imagined.

The 2022 May Day celebration will therefore go down in history as one that requires a consequential departure from patronage by worker unions.

This situation begs the question: who stands to win and who stands to lose when the ANC-led governing alliance fails to recover from falling over into the precipice?

Cosatu should be launching a programme to create private sector growth. It should be galvanising for the resuscitation of state-owned entities at commanding heights of the economy. The sheer number of jobs lost in Prasa and Transnet is enough for a campaign.

Imagining working class unity in the SA labour movement in the year of the ANC national elective conference has become more illusionary at the least, and at best fanciful.

In respect of the plight of workers, this has been punishingly compromised as workers' leaders campaign to be on one slate or another. This situation begs the question: who stands to win and who stands to lose when the ANC-led governing alliance fails to recover from falling over into the precipice?

In his address to professionals in Gauteng in October 2021, former president Thabo Mbeki made an emphatic statement to SA that the ANC-led alliance is too big and important for our democracy's stability to fail. With the not so far-fetched prospect of a new national, and almost certain in Gauteng, governing coalition in 2024, and a low depth of analysis in the academic-media-complex, as well as a hostile and resourced constituency that sees the ANC-led alliance as an affront to colonialism and apartheid-era gained privileges, the issue of who wins or loses has become off base.

The decline in ANC support, which in itself might be a sign of a maturing democracy, is to such constituencies a triumph and representative of a possibility to return to known prosperity, even if they also face the worst consequences of a society wrought with political instability.

Notwithstanding, and assuming a maturity and readiness by experts in fomenting ungovernability if excluded, the outcomes of our thus far near perfect constitutional democracy might turn out to represent a new source of social cohesion and common national interest defence by all political parties and coalition if indeed life without the ANC-led alliance as the government is that inevitable, or imaginable.

— Dr Mathebula is an executive trustee of The Thinc Foundation

Chief justice Raymond Zondo asks the question as he lays state capture at the door of the party.
News
2 weeks ago

'We are on our own': The men of Nelson Mandela Drive

Workers sit along Mahikeng’s main road day in and day out, hoping to be hired for odd jobs, while the government fails consistently to address the ...
News
2 weeks ago

South Africans believed that the introduction of democracy in 1994 would transform their lives for the better through equality of opportunities. This ...
Ideas
3 weeks ago

The Right2Know Campaign and the Gauteng Housing Crisis Committee will go head to head with authorities in the Johannesburg high court on Monday to ...
News
3 weeks ago