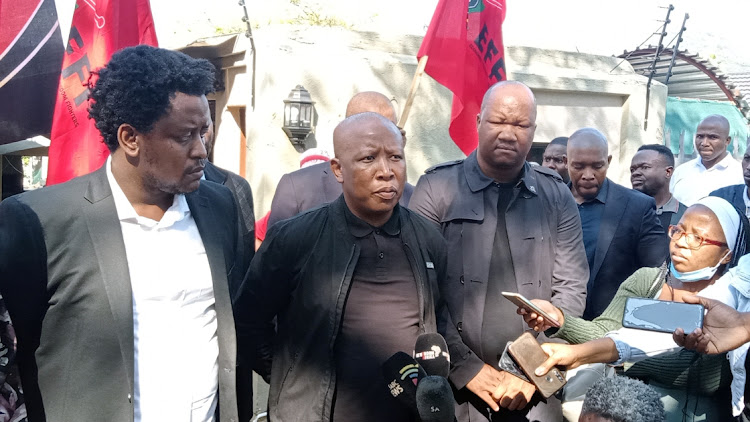 The EFF has deployed its own investigators to look into the death of Hillary Gardee, the daughter of its former secretary-general and attorney Godrich Gardee, said  Julius Malema on Wednesday.

Malema was addressing the media outside the Gardee family home where he and other party leaders went to pay their respects.

Malema said the investigators were not looking outside the borders of SA for suspects as her death has been attributed “to a mission that is internal” and that they were making headway with uncovering the facts surrounding her death.

LISTEN | "I must not be the first one to catch them," says Malema

“We want to teach them a lesson they will never forget for the rest of their lives because they took the wrong one this time around. Anyone who touches our children touches us. They don’t want to see the ugly side of the EFF. They invited the ugly side and we will show them,” said Malema.

He said the party did not want to commit to a time frame for apprehending the suspects, saying its investigators will work hard to find them, “no matter how long it takes”.

Malema said Hillary’s death was “a nightmare” for the EFF and that he cannot guarantee what would happen to the perpetrators should he catch them first.

“There are all manner of emotions that are going through my body now and I must not be the first one to catch them,” he said.

Malema also dismissed conspiracy theories linking Hillary’s death to the party’s open border policy. The killing of women, he said, was endemic in SA before the formation of the EFF.

Hillary’s body was discovered outside Mbombela on Tuesday. She was last seen when she went shopping at a plaza in Mbombela on April 29.

Postgraduate student Hillary Gardee, 28, the daughter of former EFF secretary-general and attorney Godrich Gardee who disappeared four days ago, has ...
News
2 weeks ago

Julius Malema visited the Gardee family home after the discovery of Hillary Gardee's body earlier this week.
News
2 weeks ago

The Gardee family said on Wednesday that post mortem results revealed that Hillary Gardee had been shot at the back of her head.
News
2 weeks ago