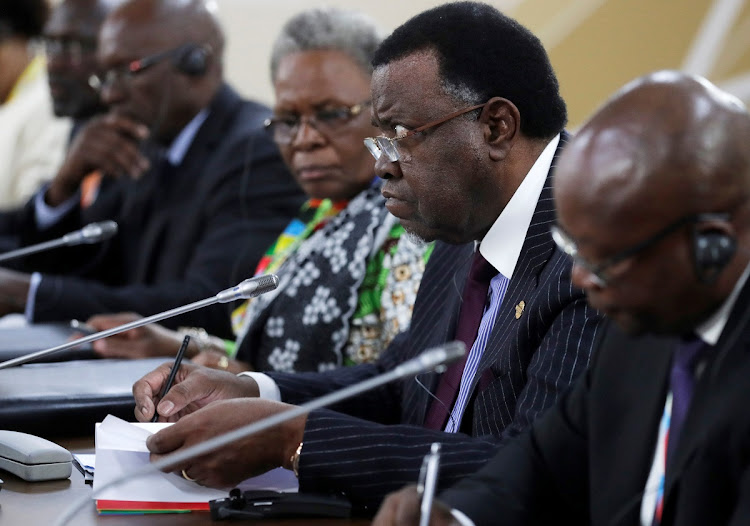 Namibian President Hage Geingob says he does “not know what favour I would have done anybody” regarding the robbery at President Cyril Ramaphosa’s game farm in Limpopo.

Geingob was speaking at a press conference, reported the SABC.

Former spy boss Arthur Fraser alleged in an affidavit that Ramaphosa was involved in an elaborate cover-up of the robbery at Phala Phala. He alleged that after one of the suspects was found to have fled to Namibia, Ramaphosa “sought the assistance of ... Geingob in apprehending the suspect in Namibia”.

Geingob said he was in frequent communication with presidents on the continent. “Ever since I took office, I’m in touch with about 14 presidents, we don’t go through secretaries, we just call each other.

“This thing happened in SA, there will be a court case maybe. Let’s see what they are [going to say] I have done. It’s a criminal case. Somebody came here illegally, they were arrested. He was charged, he paid and went back to SA. So I don’t know what favour I would have done anyone ... let them bring it up in court.”

Ramaphosa on Sunday said “dirty politics” were behind allegations that he was involved in crime.

“I will continue to fight corruption and some of these things clearly have their own political agenda and we are all aware of that, but it will not deter me from fighting corruption because I have never stolen taxpayers' money,” he said.

President Cyril Ramaphosa pulled out of a meeting with senior ANC MPs on Tuesday morning because he was “unavoidably detained” in Gauteng, according ...
Politics
4 weeks ago

'Show the nation your books': Maimane calls on Ramaphosa to come clean on robbery

"We want to understand: Was all hunting on your farm legal? How much money is being kept in your sofas and mattresses? Was all of this money ...
Politics
4 weeks ago

President Cyril Ramaphosa has told the ANC’s national working committee he intends appearing before the integrity commission over allegations that he ...
Politics
1 month ago