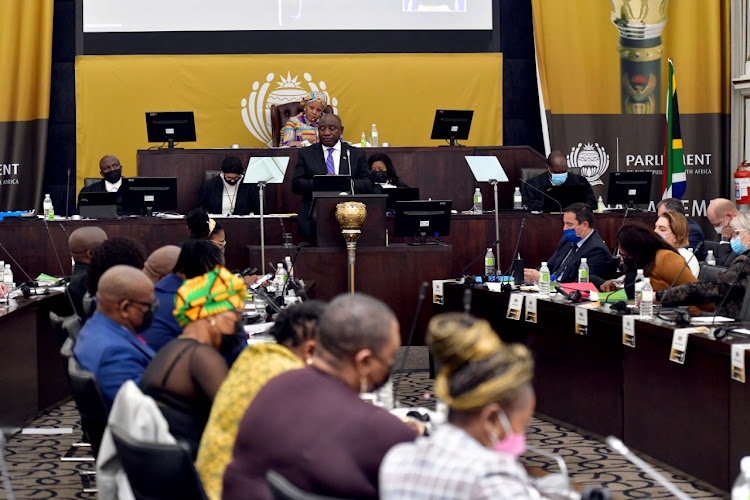 The EFF may have been removed from the National Assembly chamber on Thursday, but other opposition party leaders did not spare President Cyril Ramaphosa from questions about his game farm robbery in 2020.

“Why was the break-in and theft of the money hidden in the furniture not reported to the police? If that money came from sales of animals from the farm, as some have alleged, has tax been paid on those sales?”

Meshoe reminded Ramaphosa of a speech he made in May 2019 which instilled hope in many South Africans.

“Majority of South Africans trusted the president and were filled with hope for a better tomorrow but alas that hope was short-lived. The allegations of corruption and money laundering, racketeering, defeating the ends of justice against the president have left many devastated and deeply disappointed.

“Rather than taking responsibility for breaking the law, the president maintains that his hands are clean and his integrity is intact. The president cannot continue evading critical questions that have resulted from what happened at his Phala Phala game farm,” Meshoe said.

Meshoe also demanded to know whether it was true that a domestic worker who worked on the farm was allegedly bribed and tortured to ensure that she remained silent about the incident.

To Ramaphosa, he said: “Please do not let this Phala Phala incident be part of your legacy. Where there is fault, you need to repent and make right, not only as head of state but also because you are responsible before God.”

Leader of the FF Plus Pieter Groenewald said: “In common law, there is a crime called compounding. If the people see in the newspapers about your money it has all the elements of compounding. Therefore you cannot blame the people of SA if they have questions.

“When you started here [your budget vote] you said the people come first and I agree with you. What the people of SA do not understand is you declaring that you are willing to appear before the ethics committee of the ANC but you don’t tell the people of SA what the real facts are.”

Groenewald appealed to Ramaphosa to put the nation first by “telling the truth because the truth will always win.”

African Transformation Movement MP Thandiswa Marawu criticised Ramaphosa for “stashing millions of dollars under the mattress and failing to take this house [ parliament] into confidence and explain the circumstances around this robbery”.

She went on: “Ramaphosa told delegates in Limpopo that apart from his salary as a president he's also a farmer who trades and sells wild stock. How then should the nation have confidence in a president who boasts about flouting the constitution?”

Marawu said Ramaphosa, in his own admission, said the robbery on his farm was not reported to police.

EFF doesn't believe Ramaphosa, will 'disrupt him' until he comes clean or steps aside

EFF leader Julius Malema says the party is not buying President Cyril Ramaphosa’s story that he was not involved in the controversies surrounding his ...
Politics
4 weeks ago