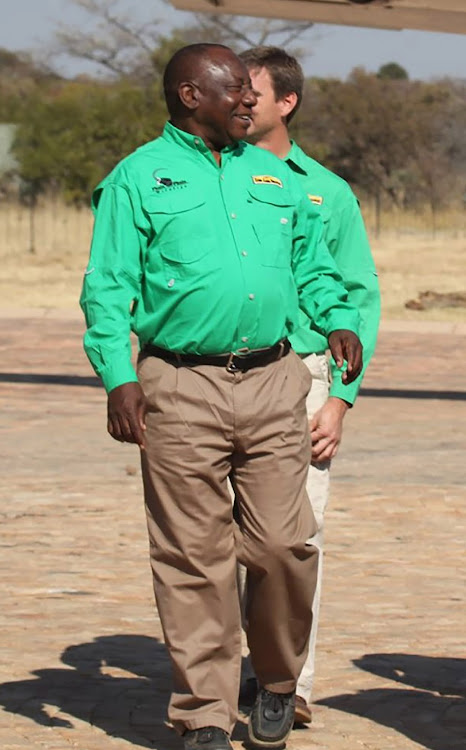 The case is one of two opened against Ramaphosa in KwaZulu-Natal on Saturday by Srinivasen Naidoo of Really Democracy.

On Sunday, TimesLIVE saw the affidavit Naidoo filed with police.

Naidoo claimed he became aware of a cattle auction by Ramaphosa on March 5 where Motsepe paid R4.7m for four Ankole female cows. He allegedly bought one of them for R2.1m.

The auction was held at Ntaba Nyoni, another of Ramaphosa's farms.

Naidoo said the sale was “suspicious” and claims this sale was not for cattle but for “favours” as Motsepe is a businessman involved in mining and energy and is in business with the government.

“The Ankole cattle are rare and have a high breeding value but the price paid in this particular transaction is particularly high and makes no economic sense.

“The suspicion is that the sale of the cattle is being used to pay bribes and kickbacks for favourable government contracts and easing of regulations in the mining and energy, banking and other sectors in which Motsepe is involved,” said Naidoo.

Naidoo wants police to check the financial records between the Ramaphosa and Motsepe families, saying they should probe whether there is fraud, corruption, racketeering, bribery or any other economic crimes involved.

Another auction was held at Ramaphosa's Phala Phala farm in Limpopo on Saturday. At that auction, the highest bid was for an Ankole bull which sold for R1.65m.

Meanwhile, Nkosenhle Shezi, a known Zuma backer, opened the other case, which involves alleged  gender-based violence in connection with a scandal at Ramaphosa's Phala Phala farm in Waterberg, Limpopo.

Former correctional services commissioner, Arthur Fraser brought to light the crime which had unfolded at the farm in 2020 when he laid criminal charges of money laundering, kidnapping and corruption against the president for a burglary which occurred on the game farm on February 9 2020.

Fraser claimed Ramaphosa concealed the theft of about $4m at the farm and instead, used his own connections to track the alleged culprits.

Shezi wants the police to probe a gender-based violence incident which he alleges occurred. It relates to a domestic worker who he claims was kidnapped and assaulted as the investigations into who stole money from the property unfolded.

“In 2020 certain money was stolen [from Ramaphosa's farm after an auction on the premises] and as a result of that, a domestic worker of the president was captured illegally because there was never a case of a break-in that was reported to the SA police ... Throughout that interrogation the lady was kidnapped, was assaulted and that is the travesty of  justice that we cannot tolerate as the citizens of the country and we have logged that case with the SA Police Service,” alleged Shezi.

Ramaphosa, through his spokesperson Vincent Magwenya, said he did not have a comment on these allegations but that he would co-operate with any investigation against him.

MAKHUDU SEFARA | Find your balls and ditch Cyril or it’s curtains for you in 2024, ANC

Ramaphosa is pulling a Zuma on us, but his removal can only be engineered from within the ANC and that’s unlikely
Opinion & Analysis
2 weeks ago