This is according to state capture commission chairperson chief justice Raymond Zondo, in the final volume of his report handed to president Cyril Ramaphosa on Wednesday.

The trio, Zondo found, were instrumental in the many illegal activities that took place at Musanda — also known as “the farm” — at the expense of national security but in service of Zuma’s narrow personal and political interests.

If Fraser, Mahlobo and Dlomo were not siphoning money out of the farm for bogus operations, Zondo contended, they were circumventing internal processes such as vetting and others.

Mahlobo, in particular, is fingered for having collected large sums of cash under the guise of an operation, allegedly bound for Zuma. 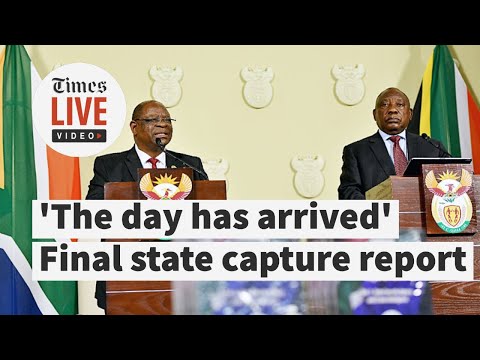 Zondo said Mahlobo had no business being involved in operational matters of the State Security Agency (SSA) in the first place as a minister, especially not collecting cash.

“Minister Mahlobo handled large sums of cash. For example, based on the evidence, there was a time when he received R2.5m a month, later increased to R4.5m a month, which he allegedly said was for former president Zuma,” said Zondo.

“The commission noted Mr Mahlobo’s denials, now a deputy minister. However, there were at least two eyewitnesses. Secondly, the details were too much to be a figment of their imagination.”

Therefore, Zondo charged, the balance of probabilities favoured the two witnesses and exposed Mahlobo as the guilty party.

As for Dlomo, who headed the controversial Special Ops unit, Zondo found that it was nothing but a parallel structure and duplicate to the presidential protection unit which is under the control of the SA Police Service.

Zondo found that Dlomo was strategic to Zuma’s intelligence strategy in that he was recruiting rogue spooks and security personnel for the president way before he occupied the position of leading Special Ops.

The recruits were all people he and Zuma knew personally in one way or the other.

“The danger with the recruitment based on connectivity was its potential to make the recruited people beholden to those who brought them in, thus compromising the objectivity of the information.

“The recruitment therefore, was not always done in the best interests of the SSA, but primarily to benefit individuals.”

Image: Nolo Moima The report stated that within a few months of taking office, the new board declined to approve the awarding of two contracts, with a combined value of R4bn.

Fraser is under scrutiny for blowing more than R200m in running operations from his office while DG, while he dodged an investigation by the Hawks for suspected involvement in criminality.

But not only that, as Fraser was also found offside, with Dlomo, for rampant abuse of the vetting process.

“Then there was the most glaring abuse of the vetting system by Mr Fraser himself. Once the inspector-general of intelligence, Dr Setlomamaru Dintwe, told him that he was investigating him for certain activities, Mr Fraser revoked Dr Dintwe’s clearance certificate,” found Zondo.