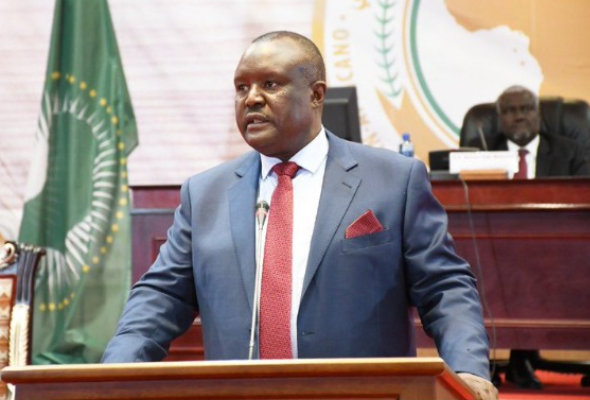 Zimbabwean chief Fortune Charumbira has been elected the new president of the Pan-African Parliament
Image: Twitter/@PanAfricanParliament

Zimbabwean chief Fortune Charumbira has been elected the new president of the Pan-African Parliament (PAP), the institution announced on Wednesday.

PAP sources say Charumbira received 162 votes, with 35 members opposing his election. Though he was sole presidential candidate, to be elected PAP president a candidate requires the support of 50% + 1 of the institution’s members and hence delegates had to vote.

Voting for the four vice-presidents was proceeding on Wednesday evening.

Zimbabwean MP Chief Fortune Charumbira is set to be elected unopposed as the Pan-African Parliament's new president.
Politics
1 month ago

Charumbira’s election was largely due to the implementation of the rotation principle, which meant the southern and northern African regions were the only ones eligible to nominate candidates for the presidency.

He was the Southern African Development Community's (Sadc's) candidate.

The principle of rotation provides for the PAP presidency to rotate among the five regions of the AU, namely north, west, east, central and Southern Africa. It is followed by the AU in all its organs as a means to unite the continent.

The southern and north regions were the only two that had not held the presidency since PAP’s inception in 2004. While the AU had agreed on the rotation principle, it is yet to be ratified by PAP and legally it is still not enforceable.

In his opening remarks to the ordinary session sitting in Midrand, Gauteng, AU commission chair Moussa Faki Mahamat pleaded with PAP delegates to give the two regions a chance to lead the institution.

He said this would be in the spirit of “fair play”.

“I want to be clear and sincere with you all. It is regrettable the protocol establishing rotation has not entered into force because of a lack of the required number of ratifications. From the legal point of view, it is obviously not effective,” Mahamat said on Tuesday.

Charumbira has previously served as one of PAP’s four vice-presidents. He was elected into that position in October 2018.

He is a traditional leader and a Zimbabwean MP.

Give rotation a chance, AU chief pleads with Pan-African Parliament ahead of elections

AU Commission chair Moussa Faki Mahamat has pleaded with Pan-African Parliament delegates to give the southern and north African regions a chance to ...
Politics
1 month ago

The Pan African Parliament could descend into chaos again when it sits to elect new leadership this week.
Politics
1 month ago