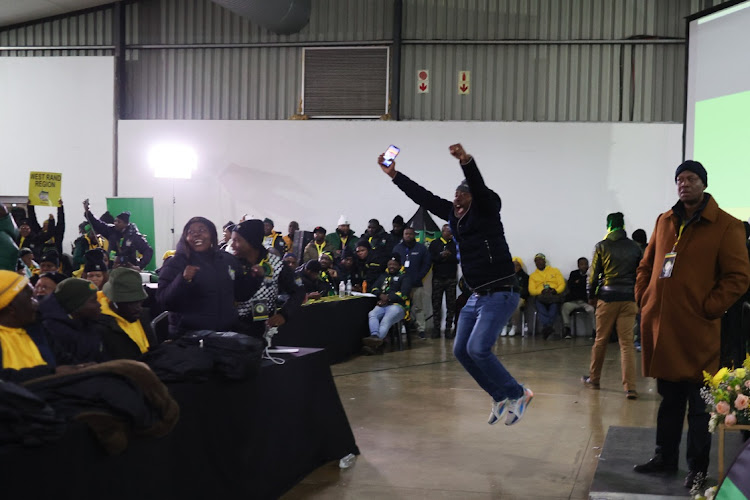 Delegates react to Panyaza Lesufi’s election as provincial chairperson of the ANC in Gauteng on June 27, at the Lakes Hotel in Benoni, during the ANC Gauteng elective conference.
Image: Alaister Russell

The ANC conference in Gauteng has mandated its newly elected chairperson, Panyaza Lesufi, and the provincial executive committee (PEC) to engage President Cyril Ramaphosa on immediate and lasting solutions to the energy crisis.

The conference, attended by more than 1,000 voting delegates at the weekend, also called for consequence management after the failure to resolve the energy crisis resulting in constants power cuts — which have been SA’s reality for more than a decade.

It wants the crisis resolved within a year-and-a-half.

As the ANC in Gauteng, we agree with the people that the energy crisis has reached unacceptable levels. The energy crisis must be resolved within 18 months. This requires an emergency response as we responded to the Covid-19 crisis.

“First, as the ANC in Gauteng, we agree with the people that the energy crisis has reached unacceptable levels. The energy crisis must be resolved within 18 months. This requires an emergency response as we responded to the Covid-19 crisis,” said provincial secretary Thembinkosi Nciza in a statement.

“The ANC conference mandates the chairperson and the new PEC to engage the president in finding a lasting solution to the energy crisis. We equally determine there must be consequence management for the failure to resolve the crisis,” he added.

The 14th ANC provincial conference held under the banner, “Reasserting the Vision of the Freedom Charter in the Year of Unity and Renewal to defend and Advance SA’s democratic Gains”, had to break into two parts because of shambolic organisation of the first leg a fortnight ago. The only thing achieved on the agenda was electing provincial officials.

On Sunday night, the conference elected 30 PEC members. Former health MEC Bandile Masuku, who was implicated in a multimillion-rand Covid-19 procurement scandal, topped the list of the PEC members. This after he previously declined nomination for the position of provincial treasurer.

Khusela Diko, the former spokesperson for Ramaphosa who was fired from her position — and later redeployed to public service — after a company linked to her late husband Thandisizwe Diko was implicated in the same scandal as Masuku, also made a comeback after being nominated as a member of the PEC.

MEC for Cogta Lebogang Maile, who lost the bid to become chairperson by a small margin to Lesufi, also made the list.

Nomantu Nkomo-Ralehoko was elected deputy chairperson, Thembinkosi Nciza as  secretary, Tasneem Motara as deputy secretary and Morakane Mosupye as treasurer. With three women making it to the top five provincial leadership, the conference said this had been a historic moment for the party.

“This sends a clear message that the ANC believes in the capacity and leadership of women. The outcome of the election of provincial officials confirms the depth of understanding about the importance of unity among ANC members in the province.

“The conference is convinced we have a capable leadership that will take the ANC back to the people. We direct the officials and the PEC to be with the people and fight social ills,” Nciza said.

Addressing the delegates on Sunday night, Lesufi said the elected leadership had taken a decision that no-one had won, no-one had lost.

“The ANC has won. We cautioned that you can win a factional battle but lose an electoral battle.”

Lesufi, in his new position, faces an uphill battle to unite the province and arrest electoral decline, seen in the party’s relegation to opposition benches in several critical metros during the 2021 local government elections.

“We leave this conference confident that we are stronger than before we arrived. We have reflected on the challenges our people face and challenges we face as an organisation. We have recharged ourselves and are more united,” the party said in a statement.

Lesufi said if delegates failed “to get the ANC right, we will struggle to get SA right. When you divide the ANC, you divide society.”
Politics
1 month ago

Q&A with Panyaza Lesufi on the ANC’s waning support

Gauteng education MEC Panyaza Lesufi has been elected chair of the ANC in Gauteng amid predictions it will lose power in 2024. Chris Barron asked him ...
Opinion & Analysis
1 month ago

KZN premier says his province will push for serious economic transformation at the ANC's national policy conference.
Politics
1 month ago