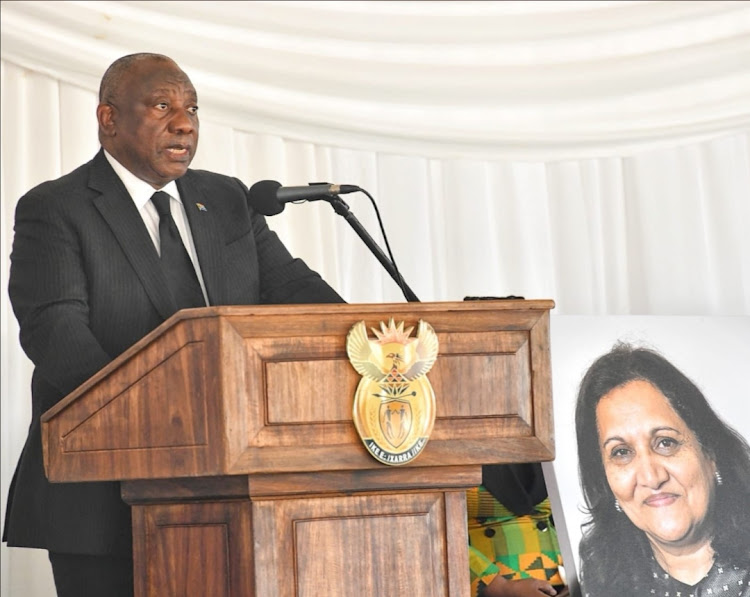 President Cyril Ramaphosa delivered the eulogy at the funeral of ANC stalwart Jessie Duarte on Sunday, hours after her death
Image: via Twitter

Jessie Duarte shielded her family from her immense pain by putting on a brave face during the last days of her life.

In a moving letter to her mother, excerpts of which were read out by Duarte's brother Zane Dangor at her funeral on Sunday, her daughter Zoe spoke of the struggle stalwart's selflessness even as she faced death.

The former ANC deputy secretary-general died during the early hours of Sunday after a battle with cancer. She was laid to rest at the Westpark Cemetery after a short service.

“Mum I've been at your side, watched you, helped you day and night. Your energy decreasing. You lost weight and you wanted space so that we don’t see the pain you are in.

“I could also see mum how little has changed, your smile is still the same, still warm, your laugh never changed throughout.”

Dangor said the passage from her daughter's letter epitomised “the Jessie we know”.

“This is not always the same Jessie sometimes portrayed in the media. What Zoe is describing is the Jessie that always put the needs of others first.

“At a time when she was experiencing the most unimaginable pain she wanted to shield us from witnessing that pain as she knew it would cause us distress.

“This selfless nature was part of Jessie's DNA. Learning from our mum Julie she sacrificed her own comfort to take care of others ...  All of us in the family were some time or another blessed by her kindness and caring nature.”

Dangor referenced Zoe's letter to Duarte saying: “Mum your body is slowing down, I ask God for peace, the peace of knowing that you will rest in peace.

“These words sum up the sentiments of the entire family. We celebrated Jessie's life. But we also knew the pain she was in. Therefore we are grateful and comforted that she is now free, that she can now soar in the afterlife, light, happy and with that distinctive smile that we all know.”

Among the many speakers at the special category 2 funeral at Westpark Cemetery was Duarte's granddaughter Kristin Whitley, who read out her obituary detailing her younger years and her contributions to the struggle for SA's freedom.

President Cyril Ramaphosa addressed mourners saying they had gathered in “sorrow and disbelief”.

He said senior ANC officials were supposed to visit Duarte at 2pm on Sunday, instead they were attending her funeral.

We are grateful and comforted that she is now free, that she can now soar in the afterlife, light, happy and with that distinctive smile that we all know

“Although our beloved comrade, Jessie has been gravely ill for several months, it is difficult to comprehend that someone with such vitality and such spirit has departed this earth.

“Comrade Jessie was a faithful, dedicated and fiercely loyal leader of the ANC.

“It is difficult to imagine the ANC without our beloved DSG, and to think that we will never again hear her voice and her laughter carrying down the corridors of Luthuli House.”

Ramaphosa said she served as ANC deputy secretary-general for nearly a decade and for 25 years on its national executive committee.

“And from the years of her youth to her final days, she served the people of SA with dedication, with humility and with a passion that is all too rare. She worked alongside great leaders of our struggle.

“She learnt the politics of liberation from leaders like Mama Albertina Sisulu, Oom Beyers Naudé and Madiba.

“From them she imbibed the qualities of revolutionary leadership. Qualities that she was to demonstrate in every position she occupied.”

He said Duarte had been an organiser throughout her life, fighting for the rights of women and workers.

“She mobilised women across the country to resist the restrictions imposed upon them by a racist and sexist political system and a patriarchal society.

“Even in the democratic era, Jessie was relentless in advancing the position of women in all areas of public and private life.

“She did not hesitate to confront inadequate representation of women in the ANC itself.

“Comrade Jessie said last year that she was looking forward to writing books during her retirement.

“It is our ardent wish that the family will publish some of the work she has produced, so that future generations may draw inspiration from the record of this fine activist.”

He described her as “gracious, compassionate and always kind”.

“She never missed a beat, she was on top of every issue, she led with distinction, and she always made her voice heard.

“She also had the courage to speak out — honestly and directly — about the abuses and destructive tendencies she saw within her movement and within the democratic government. At a time like this, our nation needs more people of her courage and consciousness.

“Our nation’s thoughts and prayers are with the family at this difficult time. The nation shares in your grief.

“May you be comforted by the knowledge that the life of this great patriot has inspired us all and her contribution will never be forgotten.

“May we all strive to honour her life by doing everything within our means, sparing neither strength nor courage, to achieve the free, united and equal society for which she so gallantly fought.”

The Nelson Mandela Foundation described ANC deputy secretary-general Jessie Duarte, who died on Sunday morning, as a "comrade and friend" to the late ...
Politics
3 weeks ago

Tourism minister Lindiwe Sisulu said she secured medication for struggle stalwart Jessie Duarte while on a trip to Russia but arrived too late.
Politics
3 weeks ago

Mourners are gathering at the Johannesburg home of the late struggle stalwart Jessie Duarte, who will be given a special official category 2 funeral ...
Politics
3 weeks ago