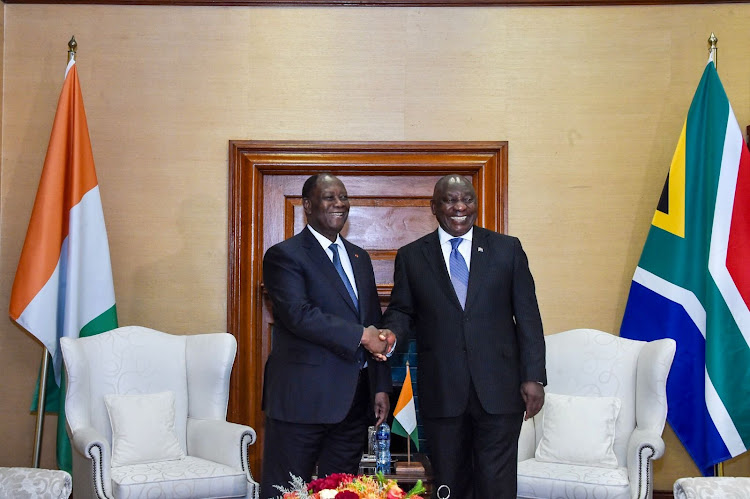 President Cyril Ramaphosa on Friday bestowed the Order of SA (gold) on Ivory Coast president Alassane Ouattara after the signing of six agreements to strengthen bilateral relations between the countries.

This comes as they mark 30 years of diplomatic relations.

“We are encouraged that despite the challenges posed by the Covid-19 pandemic, bilateral trade between SA and Côte d’Ivoire (Ivory Coast) is on an upward trajectory,” he said.

Ramaphosa made the remark during Outtara’s reciprocal state visit to SA. Ramaphosa visited Ivory Coast during his West African trip in December 2021. That visit saw the heads of state sign nine agreements and a memorandum of understanding.

Addressing the media after the signing of the additional agreements at the Union Buildings in Pretoria, Ramaphosa, said they reviewed the implementation of existing agreements and identified other areas for further co-operation.

Over the past three years, he said, the value of SA exports to Ivory Coast had increased by nearly 25%.

The value of imports from Ivory Coast had increased by more than 200% in the same period.

“While this increase is from a small base, it is clear there is huge potential to increase bilateral trade between the two countries.”

Ramaphosa said the additional agreements signalled the broad scope of their co-operation in political, economic, cultural, social and military spheres.

“These agreements cover areas of common interest, such as women’s empowerment and gender equality, youth development, employment, sport, social development and social inclusion. They will improve co-operation in economic sectors that have been prioritised as part of the Ivorian national development plan 2021-2025 and are important for SA’s economic reconstruction and recovery plan,” he said.

The additional agreements in sectors including mining, oil and gas, agriculture, communication and information technology, defence, transport and forestry indicated trade relations between the countries were steadily improving, according to the president.

To attest to this, Ramaphosa said exports to Ivory Coast had recovered after a decline in 2019 and the value of imports from the West African country had doubled over the past five years.

Several SA companies operating in Ivory Coast in industries such as telecommunications, broadcasting, banking and insurance were some of the driving forces behind the increase in exports.

The heads of states said they expected trade, investment and tourism between the two countries to be enhanced by the commencement of flights by Air Côte d’Ivoire between Johannesburg and Abidjan. The flights, according to Ramaphosa, were likely to contribute to increased traffic between SA and the West African region.

Ouattara and Ramaphosa indicated they also discussed issues of security and stability across the African continent. In appreciation of the contribution made by Ouattara towards the strengthening of the friendship between the two countries, Ramaphosa bestowed the special honour on him.

“It was my great honour earlier today to bestow on President Ouattara the Order of SA. The Order of SA (Gold) is awarded to heads of state and government who have distinguished themselves to the president of the RSA.”

President Cyril Ramaphosa will on Friday host his Ivory Coast counterpart President Alassane Ouattara for a state visit, his office said on Tuesday.
Politics
3 weeks ago

President Cyril Ramaophosa says the time for Africa to become self-reliant has come.
Politics
1 month ago

President Cyril Ramaphosa is on Friday expected to undertake a working visit to Equatorial Guinea to attend the African Union's 16th extraordinary ...
News
2 months ago