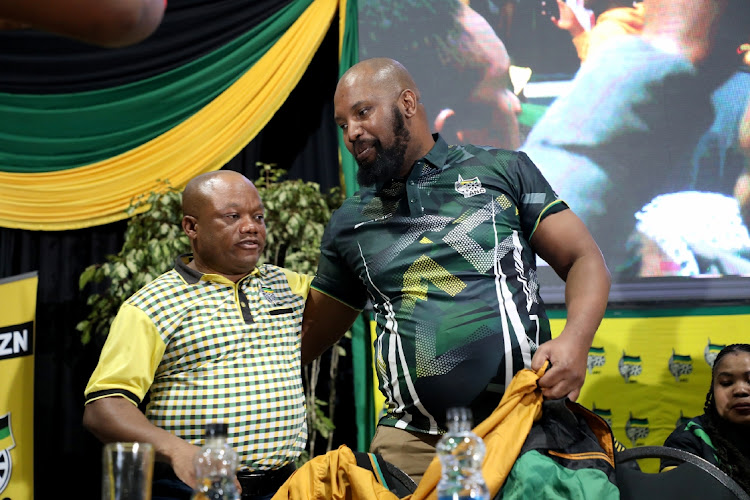 Buoyant former president Jacob Zuma supporters sang wenzeni uZuma (what did Zuma do?) and chanted the former statesman’s name when Ramaphosa entered the hall where the ninth elective conference was taking place in Durban.

The song was their expression of dissatisfaction over the manner in which the former president was arrested in 2021.

Once Ramaphosa took his seat among the newly elected top five, Duma took to the podium and asked the “comrades” who chanted “change! change!” to come to order.

“One of the characteristics of the ANC is the ability to be patient with one another. It does not matter what our differences are. We have one ANC in SA currently and the president is Matamela Ramaphosa,” he told delegates.

President Cyril Ramaphosa, who was billed to attend the ninth provincial elective conference in KwaZulu-Natal on Sunday, is no longer available.
Politics
3 weeks ago

Ramaphosa addressed more than 1,600 delegates gathered at the Olive Convention Centre to elect new leadership amid concerns about how he would be received.

Initially Ramaphosa was not going to attend due to a “mix up” in his schedule, however things changed later with him attending the conference with heightened security measures.

There were attempts to embarrass Ramaphosa when delegates booed him and chanted “Zuma” as he was about to address them.

Duma reminded delegates the ANC was in the process of renewal and discipline was the order of the day.

He thanked delegates for the manner in which they had “presented” themselves so far.

“We know there are concerns and we know you are disciplined comrades of the ANC. Your disciplined character will help this conference, which we have told the entire country is going to be smoothest conference where we made history by adopting credentials within 15 minutes.”

Duma told Ramaphosa this was unprecedented.

“We have agreed on everything and the decorum, and comrades know we want to be united in KwaZulu-Natal,”

He conceded there were issues in the province and one was that “we are not happy with the judicial system. We are not going to be quiet”.

Duma said Rampahosa, as president of the ANC, “is aware the people of KwaZulu-Natal felt [former] president Zuma was persecuted by the system and deserves our protection.”

But, he said, because plenary and delegates in branch general meetings know the process, “they need to allow the president to speak. We will tell the president about the issues”.

Duma confirmed he spoke to Ramaphosa, who congratulated him for the smooth running of the conference, on Sunday morning.

“He said job well done, comrades. He did not stop there. He also said there were matters they were dealing with and he thought he would be committed somewhere else somewhere, but he felt as president of the ANC, KwaZulu-Natal is among the biggest provinces in the party and left what he was doing to come here personally to address plenary.”

WATCH: #KZNANC: President Cyril Ramaphosa is faced with the 'Wenzeni uZuma... " question. Ramaphosa says he spoke to Duma in the morning and at the time his program was" mixed up" and he couldn't come. But later it freed up. @TimesLIVE pic.twitter.com/Kqw74qttE3

Duma told delegates they had been given a chance to sing the “revolutionary song (wenzeni uZuma) and you sang it. Please allow the president to offer his remarks.

“Whoever loves the ANC, as a disciplined member of the party and movement, will behave because they understand the issues will be addressed.”

He reminded members that next week the party heads to its policy conference and in December “there is an opportunity to elect new leadership and express fundamental matters”.

He blamed the media for being “antagonistic” in its reporting and reporting style.

“It is the media that was perpetuating things and making it appear as though there is a conflict. There is no conflict and we know how to address our issues so our conference can end smoothly.

“If you continue to misbehave, the media will not report the good things that happened here, but will reflect on the misbehaviour and processes that did not go well.”

“ In KwaZulu-Natal we know how to be disciplined even when we are not happy with something.”

The Talibans were hunting down the Ankole cattle in Durban this weekend.
News
3 weeks ago

Ramaphosa whisked away from media after boos at KZN conference

The president was met with ‘wenzeni uZuma (what has Zuma done?)’ upon his arrival at the provincial elective conference
News
3 weeks ago