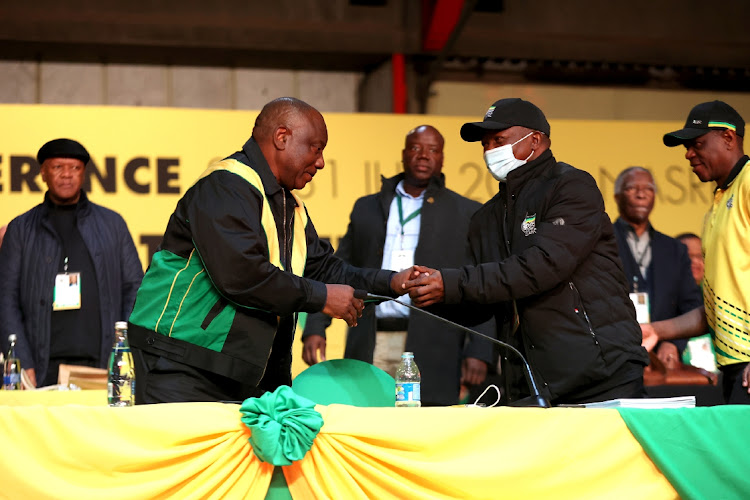 The ANC concluded it's sixth national policy conference on a reflective note, with President Cyril Ramaphosa saying the party's renewal was an overarching theme.

The question of corruption and "unacceptable conduct" by party members also featured high on the party's agenda for the conference.

"The overwhelming view of conference is for the retention of the step-aside provisions to enhance the integrity of the movement and it's leadership. Conference also noted that there are strong concerns on the perceived lack of consistency," he said.

Ramaphosa said the conference concluded that "rebuilding organisation is quite an urgent mission."

The ANC’s policy conference has "overwhelmingly” retained the party's controversial step-aside resolution despite efforts by some of its provincial structures to have it scrapped.

This was announced by ANC president Cyril Ramaphosa on Sunday during his closing address at the conference that  started on Friday.

However, Ramaphosa said there was also agreement among the more than 2,000 delegates that took part at the three-day policy indaba that the step-aside rule was not being applied in a fair manner in some instances and this should be addressed.

The step-aside policy, aimed at tackling corruptions and other forms of wrongdoing plaguing the ANC, was facing rejection at the start of the policy of conference on Friday, with provinces such as KwaZulu-Natal, Limpopo and some leaders from Gauteng calling for it to be abolished.

They argued that the rule was being used as a factional tool to settle political battles within the ANC.

But after three days of intense discussion on this matter and other policy issues, those  seeking to scrap it were defeated, a move that spelt victory for Ramaphosa and his supporters.

President Cyril Ramaphosa made the closing remarks on the final day of the ANC's sixth national policy conference on Sunday at Nasrec, south of Johannesburg.

The conference kicked off on Friday and deliberated on its 180-page policy document, which sets out its road map for the next few years and deals with proposals on issues ranging from economic and social transformation to education, health and technology.

Delegates spent the past three days debating proposals put forward by committees and the outcome will form the basis for the party's election plans for 2024.

Chemical castration for convicted rapists is back on the table for consideration at the ANC's national policy conference at Nasrec in Johannesburg.

The proposal comes as the country is reeling from news of a gang rape that took place in Gauteng.

Sisulu said the league was consulting the medical fraternity on the castration question.

ANC economic transformation subcommittee chair Mmamoloko Kubayi says there are calls to declare the unemployment in the country a national crisis.

Kubayi was briefing the media on day two of the sixth ANC national policy conference taking place in Nasrec, Johannesburg.

“I can’t see that thing being scrapped. The majority of the ANC people hate corruption, but there will be sympathy for those who say improve and make it consistent. Once it targets certain people, it becomes criminal,” said Gungubele.

Speaking on the sidelines of the sixth national policy conference in Nasrec on Saturday, Gungubele told TimesLIVE: “I do not understand which self-respecting organisation will say stop measures that protect your reputation because 'step-aside' maybe is the new buzz word.

'Ramaphosa must go' protests outside Nasrec

The group is calling for ANC President Cyril Ramaphosa and the entire NEC to be removed. #ANCPolicyConference pic.twitter.com/YECntMIiSF

A small group of ANC members are picketing outside Nasrec where the #ANCPolicyConference is being held.@niehaus_carl explains why the are picketing. @TimesLIVE pic.twitter.com/sTiMiITvql

Former president Kgalema Motlanthe has proposed that the party’s integrity commission be given more teeth to fight corruption.

Motlanthe, who is also the head of the ANC electoral committee, told journalists during a walkabout at the ANC national policy conference he believes the group of elders must be given authority to implement it's recommendations as the party fights corruption.

The integrity commission recommends to the national executive committee what steps need to be taken against members who have brought the party into disrepute. It is the NEC that makes the final decision.

At the opening of the conference on Friday, President Cyril Ramaphosa admitted the party was at its weakest since 1994.

“The ANC is at its weakest and most vulnerable since the advent of democracy. Our weaknesses are evident in the distrust, the disillusionment, the frustration expressed by many people to our movement,” Ramaphosa said.

You might be perplexed by the debate in the governing ANC on the step-aside rule. Should the rule stay or go? What does the rule say? What should the public make of this “debate”, which has become a hot-button issue at the policy conference in Johannesburg?

Gender matters should be dealt with by the presidency, says Gwen Ramokgopa

ANC national executive member Gwen Ramokgopa says the party has recommended that all gender issues be dealt with by President Cyril Ramaphosa’s office.

Addressing the media on Friday during the ANC's sixth national policy conference at Nasrec, Johannesburg, Ramokgopa gave an overview of the discussion document on gender and women emancipation.

She said commissions need to look at how the party deals with weaknesses of the current gender machinery and recommended it be led by the president.

Gender matters should be dealt with by the presidency, says Gwen Ramokgopa