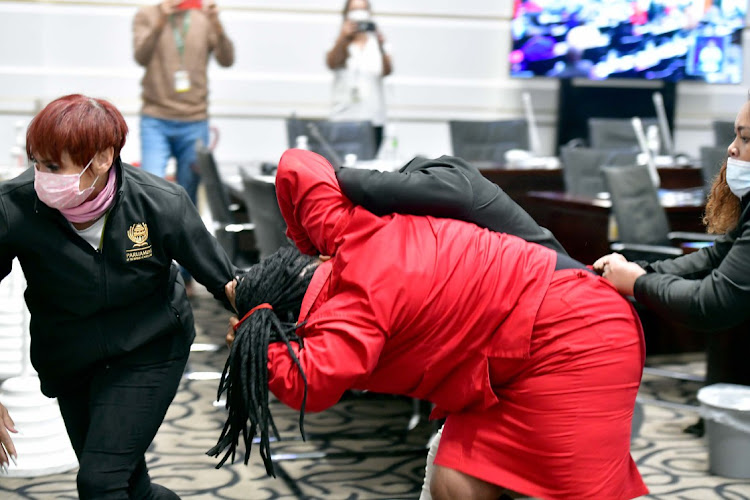 An independent investigation has found no evidence of GBV or sexual harassment in the removal of EFF MPs from a presidency budget debate in June.
Image: Elmond Jiyane/GCIS

An independent investigator who probed the removal of EFF MPs from a presidency budget vote debate has found no evidence of gender-based violence (GBV) or sexual harassment.

Advocate Elizabeth Baloyi-Mere investigated the chaotic June incident during which parliamentary protection services (PPS) removed the MPs. EFF chief whip Floyd Shivambu called for an investigation into allegations of GBV and sexual harassment against speaker of the National Assembly Nosiviwe Mapisa-Nqakula and members of the PPS. There were counter-allegations made by PPS personnel against the EFF MPs. Mapisa-Nqakula then appointed Baloyi-Mere to investigate.

Parliamentary spokesperson Moloto Mothapo said on Friday Baloyi-Mere has “ruled out GBV and sexual harassment in the scuffles between MPs and the PPS officials during the forceful removal of the disruptive members from the house on June 9 and 10”.

“However, the report found that the removal of the disruptive members by PPS was characterised by violence on both sides,” said Mothapo.

“The MPs refused to comply with the instructions of the speaker or ignored the speaker when it was clear from the rules of the National Assembly that when members are requested to leave the chamber they should do so consistent with the conduct expected of them as per their titles of ‘honourable members’.”

Mothapo said Baloyi-Mere’s report also found the speaker “endeavoured to comply with each and every rule before she could call for members to be removed out of the chamber”.

'Ramaphosa has taken us back to colonial era': Shivambu on load-shedding mention in UK parliament

"Despite committing multiple crimes in Phala Phala, Ramaphosa has taken us back to colonial era. He must fall," said EFF deputy leader Floyd Shivambu.
Politics
1 month ago

“The investigation indicates that members' attitude to the rules, not the rules, seemed to be a problem. Baloyi-Mere recommended that the speaker holds a meeting with all the chief whips to ensure that all public representatives comply with, and abide by, the rules of parliament,” said Mothapo.

“The report also recommended that during any given sitting of parliament, there should be an adequate number of female PPS personnel present, even though there might be other committees that conduct oversight work outside parliament also requiring their services. This is based on the investigator's observation that, during the scuffle, there was no adequate capacity from the female component of the PPS members to effectively handle the removal of EFF female MPs. The investigator observed that female PPS members were clearly overpowered by female members of the EFF.”

The report recommended that MPs accord respect to the PPS personnel, said Mothapo.

“This is in light of the serious claims made during the investigation, which were corroborated by the video footage, relating to abuse, threats and attacks PPS members often suffer from MPs. The independent investigator lamented the disgraceful conduct by some members of undermining the authority of the PPS personnel and treating them with disrespect and disdain as shown in some of the video footage,” Mothapo said.

“Though the investigation ruled out GBV and sexual harassment, the speaker condemns any act of violence and assault that occurred during the scuffle. She also remains distressed by the unfortunate disruptive occurrences in the chamber on both days, as these do not auger well for the image, decorum and prestige of parliament in the eyes of the public.”

Mothapo said Mapisa-Nqakula had already begun the process of implementing the recommendations in the report.

Chaotic parliament calls for reflection on every side

We reached a new low this week as parliamentary security violently ejected members of the EFF from the chamber, says the writer.
Opinion & Analysis
2 months ago

President Cyril Ramaphosa is deep in a dark trench – exactly where his opponents want him to be five months before the ANC elects new leaders.
Opinion & Analysis
2 months ago

WATCH | 'We are being sexually harassed under your watch': Second day of chaos in parliament

Parliament descended into chaos for the second day running on Friday morning as EFF MPs continued to disrupt proceedings during debate on the ...
Politics
2 months ago