Malema predicts resounding EFF victory as he votes in Seshego 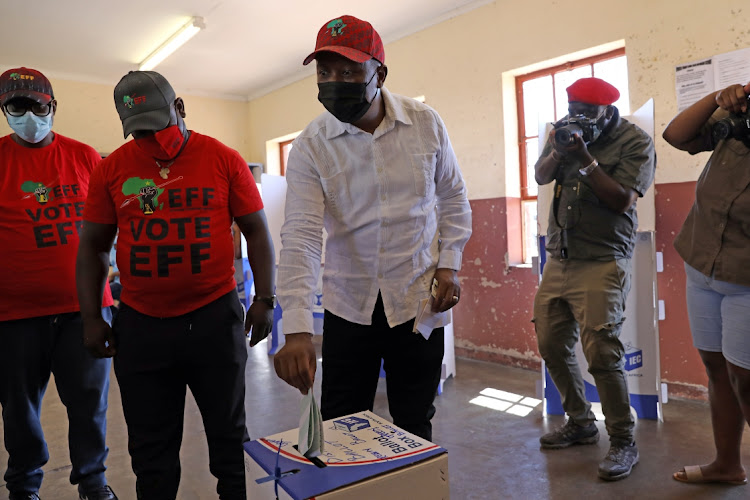 As EFF leader Julius Malema cast his ballot in Seshego on Monday, he was adamant that his party would score at least two-thirds of the vote.

After waiting in line for more than half an hour with his wife Mantoa, Malema expressed confidence that the EFF would secure at least 65% of the votes in Seshego.

Speaking to the media after casting his vote at Mponegele Primary School, Malema said  the EFF had done all it could on the campaign trail.

“We have done everything humanly possible. We have gone to every corner of SA. The leadership and members of the EFF were on the ground. The people have heard the message of the EFF and they have received it very well.

He said the youth needed to understand that they  could not leave crucial issues of governance in the hands of the elderly.

“I hope wherever the young people are, they are readying themselves to close on a high note,” said Malema.

At the voting station where Malema was voting, scores of elderly people had arrived to cast their votes since the early morning, some holding on to their old green ID books.

“I'm happy with the turnout of the old people, but we need the youth to come out,” said Malema.

After casting his vote, Malema  headed to an EFF tent outside the school.

An elderly woman left the EFF tent and approached Malema in excitement. She told the EFF leader that she knew him well as he had grown up in front of her in Seshego.

Malema gave her a warm reception before she returned to the ANC camp that was singing loudly opposite the EFF, trying to drown out the EFF songs.

As Malema left and headed to his late grandmother's house a street away, an elderly man clad in a red EFF T-shirt walked behind his convoy, beaming happily that he “had seen Malema”.

Hot contestation between ANC and EFF in Seshego

Speaking during the party's last day of campaigning, EFF leader Julius Malema suggested the red berets form a multiparty pact with the ANC and DA to ...
Politics
1 month ago

Electricity supply became the key issue as election campaigns wrapped up, with the ANC concerned that this week's load-shedding will cost it outright ...
News
1 month ago

Deep distrust, apathy, wariness and weariness - the mood in Thembisa, Ekhuruleni, on election day is palpable.
Politics
1 month ago