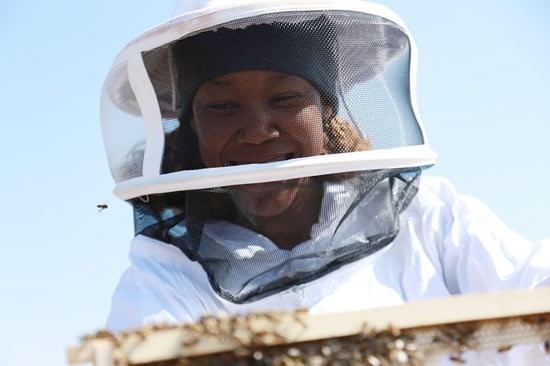 Native Nosi is a local honey brand. The 100 percent black-owned company sells raw honey harvested from its own bee hives as well as those owned by small farmers.

“I can tell you exactly where the honey in every bottle comes from. With many honeys, you can’t really tell the origin of the honey and irradiation often removes all the good enzymes from the final product,” said owner Mokgadi Mabela.

Mabela's enthusiasm is evident in every word that tumbles from her mouth. Native Nosi sells about 200kg of honey every month but Mabela is working on scaling that up to at least a 1 000kg because she often cannot meet demand.

She started by buying honey from her father, Peter Mabela, a beekeeper, and selling that to friends and colleagues.

As demand grew, he tapped his network of farmers. “Eventually, I started buying my own beehives and would set them up where my father had his. I always seem to be chasing quantity. People like my honey because it’s authentic. They want to know where their food comes from and how their food is produced and I can tell them that.” she said.

She tops up her supply by buying raw honey from small farmers in rural communities in Limpopo, Gauteng and Mpumalanga. 'These emerging farmers are often exploited because they do not have access to markets, they are all subsistence farmers who use bees to pollinate their crops. Honey is a by-product. They don’t have access to a market for their honey so they sell it cheap. I am trying to change that by giving them a market at a fair price.” she said.

The story of an African company

Mabela is the third generation of her family to work with bees. Her grandfather was the first. “He was a teacher, but he always wanted to be a farmer. But his father was adamant that he was going to be a teacher.” she said.

After returning from the Second World War, her grandfather used his savings to buy land and began farming. He kept livestock and planted seasonal crops. “He had a few beehives because he understood the role they played in pollinating his crops.” she said.

Her father followed his father into agriculture, this time concentrating on beekeeping. Mabela never felt that she would follow in his footsteps. After high school, she left home to study political science and international relations at the University of Pretoria.

About six years ago, her father got very ill and for the first time, Mabela seriously considered following her father’s path. “My father was ill, and my mother called me because no-one had any idea where his beehives were or what was going on with his business. That’s when I seriously began thinking about the honey business.” she said.

Today, the proudly South African beekeeper is as busy as the insects and she is so passionate about, as she does her bit to decrease the country’s reliance on imported honey.