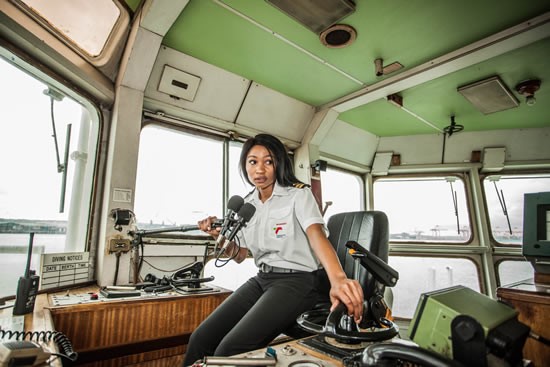 Mdletshe was born and bred in Port Shepstone and schooled at St Faiths.

“It was quite an experience where I grew up. There was no fear, unlike these days, and everyone was raised by a village,"said Mdletshe.

Mdletshe completed matric in 2006, before heading off to the Durban University of Technology to study a National Diploma in Maritime Studies in 2007.

After completing her S1 in 2007 and her S2 in 2008 she commenced her three-year training at sea, with Safmarine Shipping Company. Here she learnt how to navigate a cargo ship in high seas and stopped at various ports in Europe, Africa and Asia for cargo operations and safety surveys.

She obtained her first degree at the age of 25, while completing her Port Operations Master’s degree at the same time. The latter certified her as a qualified tugmaster. “This was the biggest challenge because being a tugmaster does not require one to have a degree, only S1, S2 and training at sea. Only after this do people usually enrol to become a tugmaster. I did both at the same time. After work, I would go to school and catch up on the curriculum that was done that day,” she said.

Mdletshe loves being close to the ocean. “The water can tell you so much about what the day ahead will bring. Some days it’s calm, other days it’s rough and sometimes there are swells, so it’s a great dynamic world! Ships also have different shapes and carry different cargo, which means they have to be handled differently,” said Mdletshe, who enjoys working with multi-cultural crews, from various countries.

Being a woman in the maritime industry is “a challenging world” said Mdletshe, who sites gender-based issues as one of the biggest challenges as it is still largely considered a man’s world.

“As much as women try to blend in and work hard to prove people wrong, it can be draining. I overcame this by remaining calm, having a positive attitude and working with people to earn their respect. With a persistent and diligent effort, you can overcome these obstacles,” she said.

Mdletshe’s success at overcoming these obstacles is evident in the award she won as acting marine technical manager. “I received an award for being the best achiever in a short space of time because I passed an audit within the first week of acting in the position.” She also received the award of ‘being a hero’ in October 2017, for saving ships from the worst storm Durban had ever seen.

“Being a tugmaster means that you sometimes have to put your big-girl pants on and be courageous,” she said.

Obtaining her Master’s degree made all the difference. “Getting my degree ensured more respect from my male colleagues. They ask me every day what I am busy with because there are only two of us who have gone this far and I was the first to complete the Maritime Diploma at the Port of Durban. This alone made me stand out,” she said, explaining that maritime studies is not an easy programme to study.

Mdletshe explains that a Tugmaster is in overall command of the craft and the people onboard.

She must ensure that the safety and fire equipment are in good condition and certified, conduct an annual safety survey of the craft, ensure the crew get proper training and sign their training books, conduct performance management reviews and help her employees to put together a development programme in line with their career path, enforce company policies and manage stores and place orders for equipment.

Mdletshe’s typical work day starts with a list of shipping movements, all of which have to be completed by the end of shift. “We start with shipping work at 06h00 and end at 17h50. Typically, two tugs work together, and each completes about eight jobs. Thereafter, we have to complete all of the paperwork. In emergency cases, we sometimes only finish work after 21h00,” she said.

This article was originally published in the GCIS Vuk'uzenzele.

Ever wondered what nuclear scientists get up to?

Before the nuclear research reactor starts its 30-day cycle, Linina Bedhesi is entrusted with the job of performing calculations to ensure that the ...
Features
3 years ago

Once students enter university, they tend to be more experienced and confident about their career path and future employment prospects. However, that ...
Features
3 years ago