Wheelchair innovation allows users to go to the bathroom independently 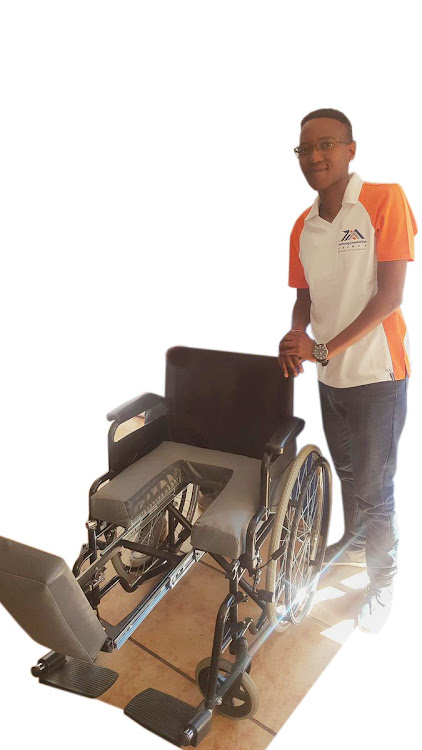 Portia Mavhungu with a wheelchair fitted with a Para Tube.
Image: Supplied.

In 2011, Portia Mavhungu (30) spent seven months in a wheelchair after breaking her pelvis. For the first time in her life, her eyes were opened to the difficulties that disabled people face, especially when using the bathroom.

“I suffered the pain and humiliation of needing help to go to the bathroom and became depressed. I kept wondering about people who are in a similar situation,” said Mavhungu.

This prompted Mavhungu, who originates from Gauteng, to design an innovative seating device that allows wheelchair-bound people to go to the bathroom independently.

Mavhungu and her partner, Darushna Chellan then developed the device and eventually produced a pioneering invention that is now attracting attention from around the world called the Para Tube, the device fits onto any wheelchair and consists of seating, disposable bags and sanitises.

“When the person needs to use the bathroom, they pull the centre part of the seat forward with a handle, and the middle seat flips up, in the shape of a toilet. There is a bio-degradable bag in the opening, which allows the user to go to the bathroom without any help. The bag can then be disposed of, similar to a nappy,” Portia explained.

In 2015, the Johannesburg inventors received funding from the Technology Innovation Agency (TIA), which allowed them to further develop the product under their newly-formed company, PRD Logical Solutions.

In 2017, they were named as finalists in the medical category of the Gauteng Accelerator Programme, which is hosted by the Innovation Hub, an agency of the Gauteng provincial government. They went on to win the award, beating 500 competitors to the title and winning R500 000 in funding, along with incubation and mentoring services.

“We have received immense business support from the Innovation Hub and the Gauteng government,” she said.

Mavhungu was recently selected to take part in a business development programme sponsored by the Swiss South African Joint Research Program. This saw her travelling to Switzerland to present her ideas.

PRD is also in the process of acquiring funding from the Industrial Development Corporation, in order to commercialise their product. They want to work with hospitals, retailers and medical aid companies to bring the Para Tube to people who need it.

The hospitality industry requires long work hours and needs someone with a passion for it, a person who is willing to do the extra work to learn ...
Features
3 years ago

How this housewife became a global grapefruit supplier

South Africa exports around 240,000 tonnes of grapefruit each year, contributing to this figure is a female farmer from KwaZulu-Natal
Features
3 years ago

From teen mom to nuclear scientist

At the age of 16, Senamile Masango was a pregnant teenager who had no idea that one day she would be a nuclear scientist. Fate proved to be on ...
Features
3 years ago