Swimming’s world-record drought has reached 18 months, and as next month’s world championships in Shanghai draw nearer the sport’s close-knit community is starting to wonder when it will be broken. 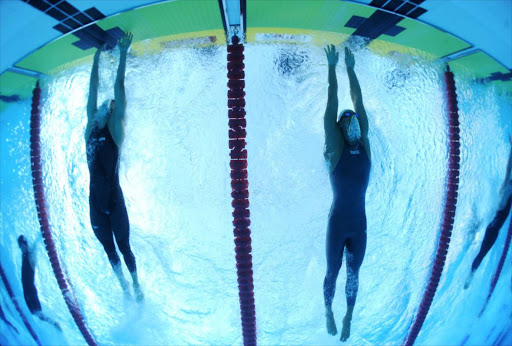 Michael Phelps of the United States (L) finishes just in front of Milorad Cavic of Serbia to win the gold medal and break a new world record in a time of 49.82 in the Men's 100m Butterfly Final during the 13th FINA World Championships at the Stadio del Nuoto on August 1, 2009 in Rome, Italy
Image: Al Bello

“I think the whole swimming world has to get ready not to see another world record in the men’s sprints for a long time,” said Serbian butterfly specialist Milorad Cavic, the closest challenger to Michael Phelps’ record eight gold medals at the 2008 Beijing Olympics.

How long? According to Cavic and others, a decade.

The reason, of course, can be traced back to the ban on rubberised bodysuits at the beginning of last year. Since swimmers were forced to wear textiles again, no world records have been broken in an Olympic-size 50-metre pool.

The only world records set at all since Jan. 2010 came at the short-course worlds in Dubai in December: two from American standout Ryan Lochte, plus relay victories by Russian men and Chinese women.

But the sport prefers to measure itself in the longer pool.

A staggering 43 world records were set at the last long-course worlds in Rome two years ago, and overall between 2008 and 2009 - the rubberised suit era — there were more than 200 records set over  long- and short-course.

The feeling from many swimmers and coaches is that there may only be a select few records in Shanghai, and quite possibly none at all in the men’s events.

That’s because men have been penalised more under the new rules,  with their suits limited to jammers covering the waists down to the  knees, while women’s suits stretch from the shoulders to the knees.

“I think it would have been better to go back 15 months, not 10 years,” said Italian swimmer Massimiliano Rosolino, who has won 60 medals in Olympics, worlds and European championships in a career spanning three decades.

Cavic and Rosolino are not the only ones who point out that men’s swimming has taken a 10-year step backward.

“Pieter’s record came 11 years ago, then were was a one-second drop, so count 10 years,” said Verhaeren, who was Van den Hoogenband’s personal coach for 15 years. “It’s like mathematics.”

Cavic and Rosolino both suggested changing the rules again to bring men’s suits in line with the women’s apparel. Making men’s suits cover the chests would also appease manufacturers, who are upset that they can no longer display their logos on men’s chests.

Less brand-visibility, they say, means less success for the companies that support swimming the most.

For the moment — at least through next year’s London Olympics - swimming governing body FINA won’t alter the rules. But FINA executive director Cornel Marculescu left open the possibility of changes at the next general congress in 2013.

“We have to see now with our swimming and coaches committees, our technical committee, to look if something needs to be changed,”  Marculescu told The Associated Press on Tuesday. “But the most important criteria is to have the same condition for everybody.”

FINA honorary secretary and Italian swimming federation president Paolo Barelli has already come out in favour of textile bodysuits for men. But USA Swimming, which led the movement for outlawing bodysuits, sees no reason to make another switch.

“USA Swimming wants to see the rules currently in place for suits remain in place,” USA Swimming executive director Chuck Wielgus wrote in an e-mail to The AP.

“I can understand the reasoning that some male swimmers might make to be able to wear suits similar in design to those that women  are allowed to wear, but USA Swimming supports the rule for male suits just as it currently stands,” Wielgus added.

Meanwhile, there is also a debate over whether to create two different lists of records, by adding a list of marks achieved in textile suits to the existing world record list.

Cavic noted that swimmers are no longer collecting bonuses from their suit manufacturers and meet organisers for world records.

The issue of installing a second list was debated within FINA at  the start of last year, according to Barelli, but was cast aside.

“They’ve ruined the game,” Rosolino said, arguing that two lists  wouldn’t make sense. “What do you ask then, ’What do you think about this half-record?’ Forget about it.”

So what times do swimmers aim for these days? Personal bests are  still the measuring sticks for most.

But what if you’re a world record holder, such as Kirsty Coventry of Zimbabwe, who holds the mark of 2:04.81 in the 200 backstroke?

“I’m still looking at that as my best time,” Coventry said. “By London it’s my goal to go that. Maybe that’s a little too anxious, but that’s my goal and I think that’s a lot of swimmers goals.

"You’ve got to be realistic and you might not get there but in order  to try you’ve got to still have the mentality of, ’That’s my best time.’”

Yet Coventry clocked just 2:09.59 at last weekend’s Seven Hills meet in Rome, finishing second behind Elizabeth Simmonds of Britain, who won in 2:08.26.

Besides the suits, another noticeable change on the pool deck these days is swimmer’s physiques, especially among the men, since overall mass seemed to improve performance in the more floatable rubberized suits.

“They’ve all suddenly gotten smaller and slimmed down,” observed  Coventry, who took a year off after the 2009 worlds.

Phelps, who has always preferred racing bear chested, is pleased  with the current format.

“It wasn’t really swimming (before). You could put that suit on an out-of-shape swimmer and still be really fast,” said the American, who holds the most world records, with seven. “So I think  that’s something good that we have back now. ... If you don’t work hard, you’re clearly not going to do anything.”

So who’s working hard enough to break a world record in Shanghai?    More than one swimmer mentioned American breaststroker Rebecca Soni in the 200 breaststroke.

“Everyone is saying Rebecca Soni will be the girl to do it,” Cavic said. “And she just might be. I trained with her once in L.A.  - she trains great. We’ll see.”

Or maybe Therese Alshammar in the 50 fly. The Swedish veteran clocked 25.37 seconds at the Seven Hills, within striking distance of her world record of 25.07.

Among the men, France’s Camille Lacourt came within 0.03 of a world record in the 50 back at last year’s European Championships in Budapest. Phelps and Lochte are also record candidates.

Cavic said, “There should be a parade for whatever guy does it.”