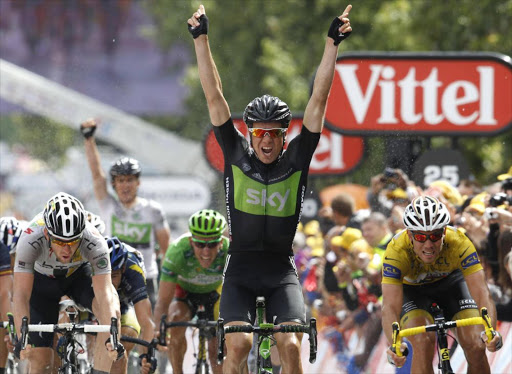 Norway’s Edvald Boasson Hagen claimed his maiden Tour de France win when he powered to victory in the sixth stage on Thursday.

Boasson Hagen benefited from an impressive work by in-form team mate Geraint Thomas to outsprint Australian Matt Goss at the end of a 226,5-kms effort from Dinan as Team Sky snatched their first Tour stage win.

Three-times champion Alberto Contador, who changed bikes twice with some 30 kilometres left, attacked the bunch in a short but demanding climb in the closing stages. But with his legs a bit stiff after a day in the rain, the Spaniard was reeled in.

All the favourites made it to the line in the same time as the day’s winner except American Levi Leipheimer, who crashed with five kilometres to go as he slipped on a white line on the road side.

The Radioshack rider crossed the line over a minute behind Hushovd in another bad day for the American outfit, who lost the services of Slovenian Janez Brajkovic on Wednesday following a crash.

Briton Mark Cavendish, who was gunning for a 17th Tour stage victory, took sixth place in the intermediate sprint behind the breakaway riders to stay in contention for the green jersey.

The Manxman could not sustain the pace in the ascent as the peloton rode in driving rain and through occasional hailstorms from Brittany to Normandy.