What a nerve! Charl on leaders' backs 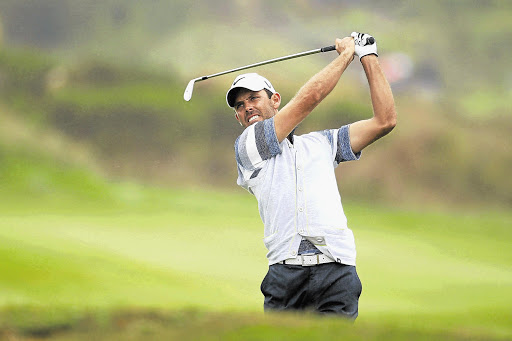 CONTENDER: Charl Schwartzel makes his move in yesterday's third round of the Volvo Golf Championships at Fancourt Picture: GETTY IMAGES

MASTERS champion Charl Schwartzel overcame a painful tight elbow nerve that limited him to a mere dozen shots on the driving range before his round, to vault into contention at the Volvo Golf Champions at The Links here yesterday.

Schwartzel carded an impressive 68, the low round of the day, in the blustery, wet conditions to move to nine-under 210, a shot behind leaders Nicolas Colsaerts and Branden Grace.

Belgian Colsaerts and South Africa's Grace have each won only once on the European Tour and they will face a huge challenge today with six major champions within four shots of their leads.

The No1-ranked course in South Africa finally bared its teeth and, with a couple of exceptions, the big names rose to the top while the lesser mortals struggled.

Retief Goosen moved to nine-under following a 70 on the par-73 layout, Louis Oosthuizen gained a couple of shots to progress to seven under and triple major winner Padraig Harrington also moved to seven under.

Ernie Els carded a third consecutive 71 to put himself in the mix at six under and Ryder Cup captain Jose Maria Olazabal is at eight under after a 72. Those were the success stories.

For others it was a nightmare. Spain's Pablo Martin endured professional golf's equivalent of a train wreck by carding 90 to leave him 20 over after three rounds. In his defence, he is remodelling his swing, but The Links has no sympathy for games under construction.

France's Thomas Levet, who has struggled all week, carded his second round in the 80s with an 82 after Thursday's 81. To add injury to insult, he slipped on stairs and needed attention for injured ribs during his round. He probably wished for a sick note with permission to take today off.

Colsaerts showed that his course- record 64 in round one was no fluke with a solid 69 but today he is surrounded by a gang of South Africans including the up-and-coming Grace. He won't be a crowd favourite.

But the day belonged to Schwartzel, who charged into the physiotherapy room shortly before tee time, and received immediate attention. Second- round leader Grace, who was undergoing stretches at the time, graciously stepped aside to allow his countryman the treatment he needed.

It paid off as Schwartzel attacked on the course with a mixture of solid driving and tremendous ball striking. A couple of putting lapses were all that stood between the owner of golf's most famous green jacket and the outright lead. But he's now in the mix and appears to have discovered his A game at the right time.

"It's the best I've hit the ball in a long time. It was one flawless shot after another and all of the birdies I made came from tap-ins," he said.

"My elbow was worrying me and the nerve was a bit tight. But the physio stretched it, which hurt a little but I never felt it on the golf course."

In spite of his superb score, Schwartzel still missed a couple of makeable birdie putts, most notably on the par-four 14th and the par-five 16th. When a birdie putt finally dropped from a metre at the par-three 17th, he raised his arms in mock celebration.

"I wouldn't say I have putting problems but the ball won't go in the hole," he said. "I'm actually hitting what feels like good putts but sometimes I'm not starting the ball on line and when I do start it on line I read the line wrong."