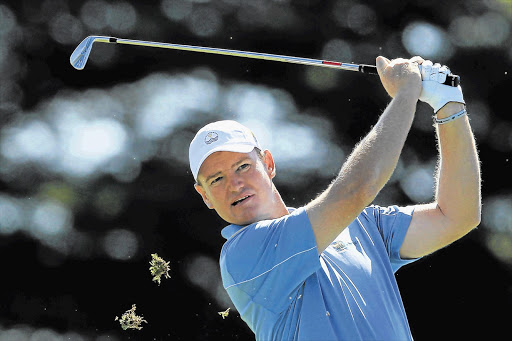 Ernie Els took a huge step towards his goal of moving back into the world's top 50 after an impressive performance at the Volvo Golf Champions at The Links at Fancourt on the weekend.

The official world golf rankings released yesterday showed that Els had climbed by 14 places to 57 after a joint second place finish at one of the European Tour's flagship events.

On a dramatic final day the Big Easy and his long-time rival and friend Retief Goosen lost a play-off to 23-year-old sensation Branden Grace on the first extra hole.

The George youngster kept his nerve to hold off his two idols as well as a field littered with major champions, who all pulled to within a shot of the lead during the fourth round.

Grace's second consecutive win on the European Tour following his victory in the Joburg Open nine days ago has seen him catapult from 271st at the end of last year to 92nd this week.

The carrot that Els is chasing is entry into the Masters, which he has played every year since 1991. To qualify, he needs to be in the world's top 50 at the end of March and his final round of six-under 67 was a superb effort. Had his putter been better, Els would have won comfortably.

"A lot of people are reminding me that I'm not in the Masters," the 42-year-old said prior to the Volvo tournament.

"I know where I stand in the rankings, I don't need reminding. But I've got a couple of months to rectify it - you don't want to be asking for an invitation to Augusta, so I'll just have to qualify."

Goosen also enjoyed a move in the right direction, claiming a place back in the top 50 at 45th from 51st last week.

US Masters champion Charl Schwartzel, who finished fourth at Fancourt, also moved one place up the rankings to No8. Louis Oosthuizen, the 2010 Open champion was also in positive territory with a move from 27th to 23rd.

In all there are nine South Africans in the world's top 100, with Rory Sabbatini at 62nd, Thomas Aiken 79th, George Coetzee 82nd and Jaco van Zyl 83rd.

To add to the healthy state of affairs, South Africans occupy the top four places on the European Tour's Race to Dubai, with Grace in the lead followed by Goosen, Oosthuizen and Els.