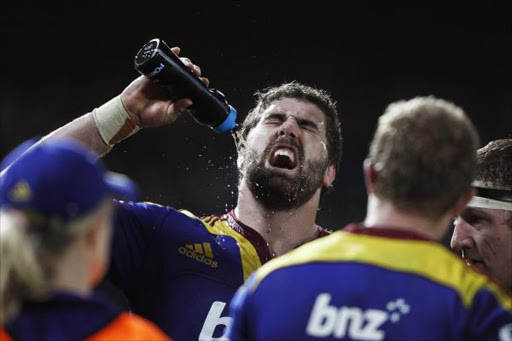 Jamie Mackintosh of the Highlanders drinks water after the round 10 Super Rugby match between the Crusaders and the Highlanders at Trafalgar Park on April 23, 2011 in Nelson, New Zealand
Image: Martin Hunter

THE Highlanders won the encounter of the New Zealand Super 15 high-flyers yesterday, maintaining their unbeaten record with a 19-17 victory over the Hurricanes.

The win kept the Highlanders at the top of the New Zealand conference while the Hurricanes, in their first home game of the season, suffered their second loss in four games and slip to third behind the Chiefs.

The long-awaited showdown between the Hurricanes and the team that took in their high-profile defectors - All Blacks Andrew Hore, who played 106 games in the gold jersey, and Hosea Gear - was not copybook rugby.

There were too many turnovers by both sides and the outcome was eventually decided by penalties with Highlanders replacement flyhalf Chris Noakes landing the winning three-pointer with seven minutes remaining.

Meanwhile, fullback Dave Harvey scored a try and kicked a conversion and three penalty goals as the Western Force edged the Waratahs 21-20.