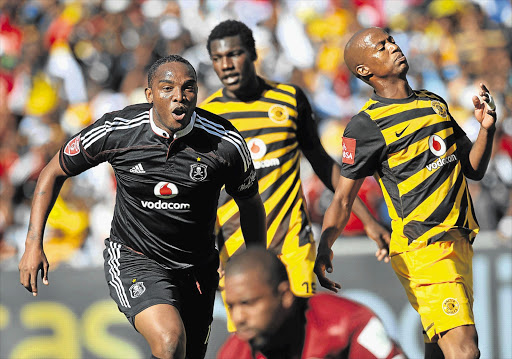 Kaizer Chiefs put on a united front for their fans as they observed Human Rights Day with a 2-0 Premier Soccer League victory over Bloemfontein Celtic here last night.

Dogged by problems of a player revolt and unhappiness in the camp in recent weeks, Chiefs put their weekend defeat by Orlando Pirates behind them and returned to winning ways with goals from Lucky Baloyi and Lehlonoholo Majoro in either half.

Though Celtic played with conviction in the second half, there was no way they were going to get even a sniff at goal.

A lack of decisiveness and sharpness upfront nearly proved costly for Chiefs in the opening minutes, with Siphiwe Tshabalala the main culprit . But t he wiry-framed Baloyi put Chiefs' fans out of their misery when he found space on the edge of the box and smashed the opener in the 36th minute .

He could have scored a brace had he not fluffed a glorious opportunity in the 80th minute.

But it barely mattered as Majoro had already extended the lead to 2-0 in the 63rd minute, finishing with a flourish from close range.

Well-positioned inside the area, a rejuvenated Majoro easily connected a majestic Mandla Masango cross from the right.

Amakhosi upped the tempo immediately after the interval, laying siege on the Celtic goal.

Presented with a golden chance by Masango to increase the tally, Josta Dladla shot meekly at Thabani Stemmer on the hour mark.

Chiefs' coach Vladimir Vermezovic made a few changes to the team that lost to Pirates, resting left-back Keegan Ritchie.

Majoro started in the place of Bernard Parker.

Celtic coach Clinton Larsen gave starting berths to Kerspuy Angelo, Lethola Mofokeng and Phenyo Mongala, who were benched in their 2-0 win over Santos.

Lamontville Golden Arrows added to Santos' woes when they beat the Cape side 2-1 at Athlone stadium. Siyabonga Nkosi and Thamsanqa Gabuza scored for Arrows, while Neo Segalo netted for Santos.

The visitors were dealt an early blow when Keamogetse Wolff was sent off in the eighth minute.

Wolff did not feel the referee had dealt sufficiently with a tackle in which he was involved. He reacted by using abusive language and was shown a straight red.

It compounded problems for the Cape side, who came off a 3-0 drubbing at the hands of log-leaders Mamelodi Sundowns in their previous game.

Edward Mnqele produced one of the worst misses of the season after he had made a bustling run down the left, rounded Sander Westerveld in the Ajax goal before shooting inexplicably wide.

Mnqele redeemed himself in the 33rd minute when he made a quick turn and found the back of the net.

Supersport United and Platinum Stars played to a goalless draw at Moruleng Stadium in North West.

Black Leopards eased their relegation woes with a 1-0 victory over Maritzburg United in a rain-delayed match in Pietermaritzburg. The all-important goal for the Limpopo side came via Raymond Manana in the 55th minute . - Additional reporting by Thami Ngolobe and Sapa