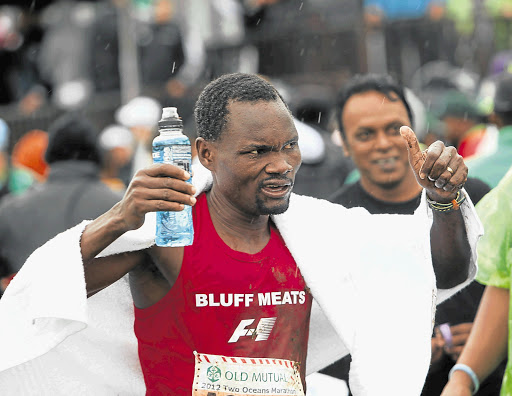 ZIMBABWE'S long-distance running sensation Stephen Muzhingi has vowed that, should he claim a fourth consecutive Comrades Marathon title in June, he will dedicate his win to President Robert Mugabe.

While many consider Mugabe to be a despot, the 34-year-old runner from the Formula One Bluff Meats team has his reasons to be grateful.

He said: "I was honoured by President Mugabe last year [after winning the Comrades] ... he took time from his life to spend seven hours with me." Muzhingi was also given Z$50000 (about R1000) and a farm.

Muzhingi said: "For that appreciation and for honouring me, I dedicate this year's Comrades Marathon to him."

Mugabe's generosity, said Muzhingi, was one of the few acts of kindness he had seen in his life.

Muzhingi could make history by being the first man to win the Two Oceans and Comrades in the same calendar year since Derek Preiss managed the feat in 1974 and 1975.

A hot favourite for this year's race, Muzhingi said he had approached the Two Oceans as a mere training run.

"I went to the Two Oceans for training in preparation for the Comrades," he said.

Muzhingi's has been a story of endurance through adversity, and humility in the face of overnight fame and adoration.

"I started running when I was five years old, when my mother bought me a bicycle rim to push while sprinting to and from the shops, and chasing cattle to the dip.

"I also used to live 11km from school. So I would run to school because in those days if you arrived late, the teachers would hit you," he said.

At the age of eight, he lost his father to cancer.

This meant that life became a constant struggle to acquire basic human needs: food, clothing and an education.

"When my father died, there was no one there for me," he told the Sunday Times.

"When he was alive I always had school uniform, but all of that changed when he died.

"Suddenly I couldn't even afford to go to school and there were even times when I had no food.

"I went to live with my uncle - Esau Magwaza - in a village called Chivhu. My uncle was a top athlete, surviving by running cross-country events. He inspired me a lot."

Growing up in poverty meant he had to learn to take setbacks on the chin and persevere - traits that have since become part of his long-distance running armoury.

"My first competitive running competition was when I went to the Delport cross-country competition in Harare, where I started running to fund my schooling.

"I had no one to pay school fees for me so the money I got was to pay my school fees," he said.

Upon completing high school, he continued competing in club athletics in Harare.

In 2004 he visited South Africa for the first time after Cliff Chinnasamy - now his trainer and manager - called Muzhingi to the country as a possible replacement for one of his team runners.

His countryman then introduced him to the Comrades and encouraged him to compete.

"Back then I didn't know anything about the Comrades ... I thought it was from Durban to Cape Town," he said.

Muzhingi finished in 123rd place in his first Comrades in 2005 - but after finishing third in 2008 he decided to train exclusively for the Comrades and Two Oceans marathons.

The result was a Comrades treble from 2009 to last year and the second-fastest time in the 89km course's history.

Muzhingi has also set his sights on winning the standard New York marathon.