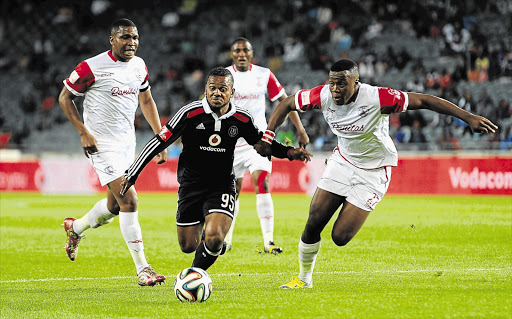 CATCH ME IF YOU CAN: Kermit Erasmus of Pirates loses his Free State Stars markers last night Picture: GALLO IMAGES

For a while last night, goalkeeper Glenn Verbauwhede looked to be the hero for a Free State Stars side clearly playing for a point.

For some 70 minutes, the Belgian goalkeeper had kept Ea Lla Koto in the game with some good saves, getting down to deny the Orlando Pirates attackers, mainly Kermit Erasmus and Mpho Makola.

But after knocking on the door on numerous occasions, Pirates finally had the beating of the former Mamelodi Sundowns goalkeeper, as left winger Daine Klate found a chink in the Ea Lla Koto armour 18 minutes from time to earn the hosts their second win at home this season, which moved them to within seven points of league leaders Kaizer Chiefs.

Verbauwhede is enjoying himself in the Stars goal and the man-of-the-match award he picked up last night will give him the confidence he needs going forward.

After a dull first half hour, Bucs came alive and piled the pressure on the Stars defence.

Pirates coach Vladimir Vermezovic decided to bring on Lehlohonolo Majoro, a striker who has earned himself the tag "super-sub" because of the sudden impact he can make.

But Majoro was quiet this time around. It didn't matter as Klate came up with the goods, finishing off brilliantly after receiving a ball from the left.

Pirates will now travel to Black Aces on Tuesday.