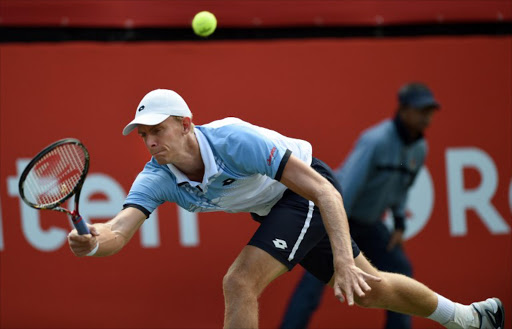 Kevin Anderson of South Africa runs down a return against Gilles Muller of Luxembourg during their first round match at the Japan Open tennis tournament in Tokyo on October 6, 2015.
Image: AFP PHOTO / Toru YAMANAKA

When does a loser emerge a notable winner?

The answer is when Kevin Anderson became the first South African since Wayne Ferreira 18 years ago to achieve a Top 10 world singles ranking in the same week that he was bundled out 6-2, 6-3 in the first round of the Japan Open by 43rd-ranked Luxembourg veteran, Gilles Muller.

This ironical anomaly has materialised by virtue of the fact that Gilles Simon and Richard Gasquet shed more points than Anderson when the new rankings were officially announced on Monday - thereby enabling Anderson to move into 10th place above the two Frenchmen in the world ratings from a previous 12th best position.

In breaking the elusive Top 10 barrier, Anderson will join other South Africans Eric Sturgess and Cliff Drysdale, who both made it to fourth position; Wimbledon finalist Kevin Curren, who reached a career-high fifth position; Ferreira, who made it to sixth place and was in the Top 10 over a number of years; and Johan Kriek, the only South African to win a grand slam singles title when he was successful on two occasions in the Australian Open and made it to eighth in the world

Anderson entered the recent United States Open at a career-high 14th world ranking and his pending improvement since began by reaching his first-ever grand slam quarter-final at Flushing Meadows after stunning third-seeded Andy Murray in the fourth round.

The glory ride of the 29-year-old Anderson was summarily halted in the 6-4, 6-4, 6-0 quarter-final loss against Switzerland's fifth-seeded Stanislas Wawrinka - thereby preventing the Johannesburg-born big server from equalling the feat last achieved by a South African of reaching a grand slam semi-final when Wayne Ferreira made it to the last four in the Australian Open in 2002.

But in joining the select band of South Africans who have reached a grand slam quarter-final after seven near-misses when losing at the last 16 stage, Anderson will most certainly look on his achievement in the United States Open as a notable milestone in his career.

Also on Monday, Murray vaulted above Roger Federer into second place in the rankings behind Novak Djokovic.