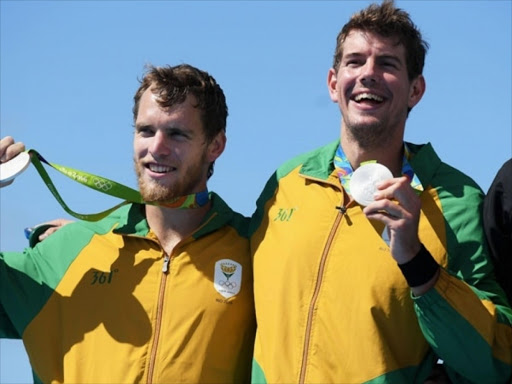 South Africa's Lawrence Brittain and Shaun Keeling clinched a silver medal in the men's rowing pairs at the Rio Games on Thursday.

The duo occupied fourth position at the 1500-metre mark, - and ultimately staved off staunch opposition from Great Britain, France and Australia to secure second spot in a time of 7:02.51.

"It's awesome getting an Olympic silver medal. We had a pretty good start and we were leading for a bit, but we were just struggling to find some rhythm," enthused Brittain.

"Through the second 500, we were a little bit bouncy and tense in the shoulders and then coming through the halfway mark we were sitting in fourth and it all started happening.

"We suddenly grew in confidence and through the last 500 we managed to put the big work in and then suddenly we found ourselves in second."

"We had so much confidence from when we saw the rest of the team coming in and all of them making finals  -especially the fours.

"We've been training against them all season, so it's nice to cheer for them and they gave us the confidence to get on and give a big performance," added Brittain.

"Hopefully they can take confidence that the team is fast and if we put the big races on we will come home with some more bling."

Keeling and Brittain's achievement weighed in as South Africa's third medal - all silver - of the Rio Games.