Golden Arrows miss out on setting a new club record 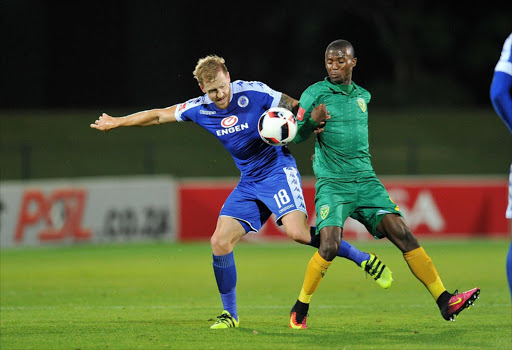 Lamontville Golden Arrows missed out on setting a new club record on Wednesday as they squandered a late penalty and were held to a 1-1 home draw by 10-man SuperSport United at a rainy Princess Magogo Stadium.

Lamontville Golden Arrows missed out on setting a new club record on Wednesday as they squandered a late penalty and were held to a 1-1 home draw by 10-man SuperSport United at a rainy Princess Magogo Stadium.

Arrows have never won four successive league matches but after three wins in a row at the start of the new campaign were hoping to set a new mark for the club against an injury-depleted SuperSport.

They went behind to SuperSport but pulled level and were then handed an advantage when full back Onismor Bhasera was red carded in the 66th minute after two bookings.

It was followed by a 77th minute penalty which Rowen Williams saved from Wayde Jooste to keep intact a valuabale point for the visitors who have now drawn three of their opening five league matches.

Arrows share top spot in the table with Kaizer Chiefs and have high hopes of a successful season.

SuperSport almost caught out Arrows goalkeeper Maxamilian (SUBS: correct spelling!) Mbaeva with a curling corner from Thuso Phala that the home captain had to scramble to touch over the bar.

But he was emphatically beaten just three minutes later when Thuso Phala played an accurate pass through the middle, onto Kingstone Nkhatha who went round the keeper and tucked it away from an acute angle.

It was only the second goal of the league season for SuperSport, who had spent nine days cloistered in a Durban hotel and were playing their third game in seven days in KwaZulu-Natal.

SuperSport’s lead lasted 15 minutes before they got caught at a set piece. Wayde Jooste’s kick took a deflection off Reneilwe Letsholonyane to fall at the back post for Lerato Lamola to hit across the face of goal and allow Musa Bilankulu to slide in at the near post.

In the second half Andile Fikizolo missed the best chance for Arrows before Jooste was twice pulled back by Bhasera, who was given a deserved marching order.

Denwin Framer then tripped Jooste who got up to take the resultant penalty only for Williams to make a fine stop to save the point for SuperSport, who go back home undefeated from their trio of coastal games.