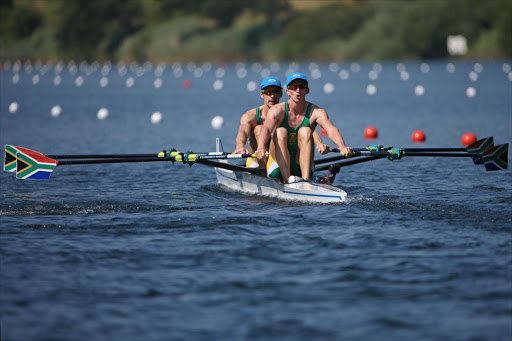 James Thompson‚ South Africa’s most decorated rower‚ hailing long-time partner John Smith the greatest lightweight in the world as he officially announced his retirement this weekend.

Thompson and Smith were members of the lightweight four crew that took gold at the 2012 Olympics‚ and two years later the duo teamed up in the lightweight double sculls to claim the world championship gold in a world record.

In both races they came from behind amid strong surges.

But they ended fourth at the Rio Olympics last year‚ the result of a mistake Thompson said he made in the final 250m of the 2km race.

“We had always raced our entire lives going for gold and we could have settled for a safe silver at Rio … [but] we put it all out there.

“We did an extra step. We went into what we call the munkle‚ which is crazy rowing and wild … that is where we have always been the best.

“I called it and I didn’t realise John was already in that zone and it was my mistake not to be able to read him. He then made a small technical mistake‚ but the mistake was mine to take us to that point.”

Thompson‚ who has won silverware at more levels of international rowing‚ from juniors to the Olympics‚ than any other SA rower‚ said the race had hurt.

“Nothing in my entire life has been as gut-wrenching as that mistake. Nothing. I thought we learned to cry [tears of joy] in London‚” he said.

Thompson rated Smith‚ who is moving up to heavyweight‚ as the finest lightweight rower he had worked with.

“Obviously Sizwe [Ndlovu] and Matt [Brittain‚ the other two members of the lightweight four] are world class‚ but John is a truly special athlete. He truly is.

“When he’s on fire I think he’s limited by who he’s with more than anything else.”

Thompson‚ 30‚ leaves this week on a travel adventure with his actuary wife Carolyn‚ driving through Africa and into Europe.

“We’ll spend a month following the Tour de France and then another month driving in Europe.”

Beyond that‚ he has no set plans for the future. Some people within the sport believe that Thompson‚ who took four months off in 2013‚ will be back in a boat.

But the ex-rower dismissed this outright: “There hasn’t been a single day where I’ve thought I’ve made the wrong decision.”

There was no hint of regret in the eyes of Thompson‚ relaxed after another successful edition of the annual Rock the Boat regatta he and Brittain launched four years ago.

Beer in hand‚ he watched the sun set over a still Roodeplaat Dam‚ the only movement on the water coming from a raft of ducks.

“Beautiful‚” he exclaimed. “This is what I’ll miss.”