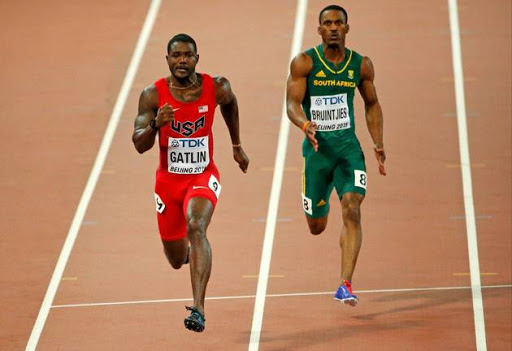 Justin Gatlin of the U.S. (L) and Henricho Bruintjies of South Africa compete in the men's 100 metres heats during the 15th IAAF World Championships at the National Stadium in Beijing, China August 22, 2015.
Image: DAVID GRAY

Former national 100m record-holder Henricho Bruintjies bounced back with his best run in two years on Tuesday night as he clocked 10.06sec to finish second at the Paavo Nurmi Games in Finland.

Bruintjies hadn’t been that fast since striking 9.97sec in Switzerland in July 2015 to take ownership of the South African record.

His feat in Turku on Tuesday night matched his previous fastest from Prague a month before his SA mark‚ and ironically both 10.06 efforts came with a 1.5 metre per second tail wind.

Bruintjies’ 9.97 SA record was equalled a few days later by Akani Simbine while winning the 2015 World Student Games title‚ but since then‚ the two sprinters have travelled vastly different roads.

Simbine has dipped below 10 seconds 11 times since then‚ taking his career tally to 13.

He has lowered the SA record to 9.89‚ finished fifth at the Rio Olympics and scored a maiden Diamond League victory earlier this season.

During that time Bruintjies hadn’t been below 10.1. Until Tuesday night.

The US and Jamaica are the only other nations with four faster sprinters on the world rankings so far.

Bruintjies’s run on Tuesday night saw him leapfrog Emile Erasmus‚ who ended third in the same race in 10.13.

The SA pair were beaten in the final by Turkey’s Ramil Guliyev who shaved 0.04 off his personal best as he clocked 10.02.

Also competing in Turku‚ Antonio Alkana ended third in the 110m hurdles‚ clocking 13.35 after posting the fastest time of the heats‚ 13.38.

And Olympic silver medallist Sunette Viljoen was third in the women’s javelin with an effort of 61.54m‚ behind Tatsiana Khaladovich of Belarus (65.03) and Australian Kelsey-Lee Roberts (64.06).