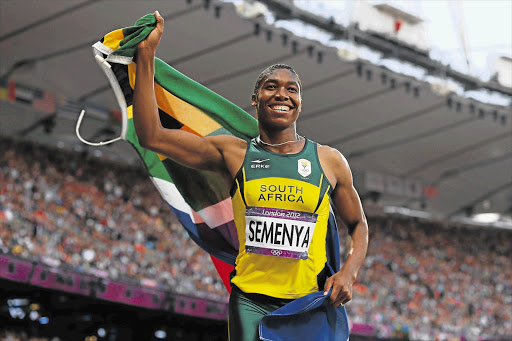 Hyperandrogenism regulations were nonexistent before 2009, but were created after the disastrous handling of the Caster Semenya case in Berlin that year.
Image: CAMERON SPENCER/GETTY IMAGES

The governing body for global athletics, the IAAF, heads to the Court of Arbitration for Sport in Switzerland at the end of the month, armed with evidence it hopes will be enough to overturn a CAS decision of 2015, and to reinstate its so-called “hyperandrogenism policy”.

This is, by way of background, the evidence that the IAAF was asked to find in July 2015, when CAS ruled in favour of an Indian sprinter, Dutee Chand, who was challenging the hyperandrogenism regulations.

Hyperandrogenism regulations were nonexistent before 2009, but were created after the disastrous handling of the Caster Semenya case in Berlin that year.

They required that intersex athletes like Chand (and, allegedly, Semenya, though she has not confirmed this), who usually have male chromosomes, internal testes and high levels of the male hormone testosterone, take hormone-suppressing medication.

This to reduce their testosterone levels below a cut-off level that had been determined and verified by research on female athletes.

The policy meant that from 2010 to 2015, all intersex athletes — nine were identified by the research in 2011 and 2013 — were taking hormones to keep their testosterone levels below a cut-off of 10 nmol/L. Then Chand won her CAS case.

From July 2015, testosterone suppression was no longer required. However, that was merely the first instalment. CAS did not dismiss the policy outright, but made its decision based on: (a) a lack of evidence for the benefit of testosterone in women; and (b) the discriminatory nature of applying such a policy to one group only, in the absence of evidence.

They gave the IAAF two years to gather that evidence, and here we are, for part two. If the IAAF is successful and CAS reinstates the hyperandrogenism policy, then a group of at least nine women identified in the course of the IAAF research — Semenya being one of them, allegedly — will have to undertake hormone therapy again. I’ve no doubt they will slow down substantially.

The big question for now, though is: Will the IAAF’s evidence be enough? On the face of it, I doubt it. Unless the IAAF has more than this published study, I don’t think it will clear the bar that CAS set with its verdict.

CAS was very clear in saying that the advantage of intersex athletes needed to be large, outranking other genetic advantages. It referred many times in its decision to the typical 10% advantage that men enjoy over women, which reveals where its thinking is.

I don’t think that a 1.8% to 4.5% advantage in some events only will clear that bar and satisfy CAS’s thinking, though I may be wrong. A lot depends on how well both sides can argue the issue of what constitutes an advantage that, to borrow CAS’s words, “outranks other genetic advantages”.

I think CAS was wrong to get trapped into this “ranking’’- o - advantage thinking. People are quick to point out that all successful athletes have genetic advantages over their rivals — LeBron James is tall, Usain Bolt has fast-twitch muscles, Michael Phelps had a body perfect for swimming.

Defending the integrity of women’s sport requires that this separation be protected. But CAS created a philosophical question and dilemma that science can’t answer to defend it. Whatever decision is made, and I expect CAS to repeat its previous one, won’t put an end to this controversial issue — it has some far-reaching implications, most notably for transgender athletes.

However, it is the next instalment in the now longrunning intersex issue, and all eyes will be on Lausanne at the end of the month.